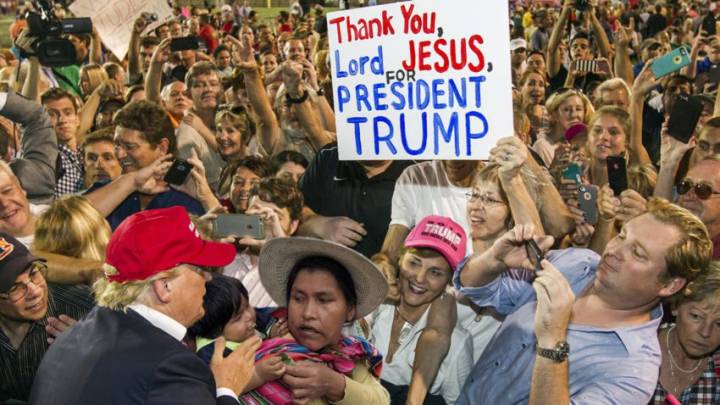 Donald Trump last year showed an openness toward setting up a federal database for all Muslims in the United States and also called for the outright ban of all Muslims entering the country for an indefinite time in the wake of the terrorist attacks in San Bernardino, California. At least one terrorist group has predictably used The Donald’s words in recruitment videos to convince people in the Muslim world that America’s leading politicians are really on a new crusade against an entire religion of more than 1 billion people. When asked about this over the weekend on CBS’s Face the Nation, however, the doughy billionaire only offered a shrug.

“What am I going to do?” Trump said after learning that al-Shabab, al-Qaeda’s East Africa affiliate, posted a recruitment video featuring him on Friday. “I have to say what I have to say. And you know what I have to say? There’s a problem. We have to find out what is the problem. And we have to solve that problem.”

Trump can say what he wants, of course, but anyone who actually knows anything about what’s going on in the world knows that Kurdish forces in Iraq and Syria have been the most effective fighters so far against Islamic State. The majority of Kurds are — you guessed it — Muslims. You know, the same group of people who Trump wants to bar from entering the United States all together.

If you’re going to beat Islamic State, you’re going to need the help of Muslims from across the world. You are less likely to get that help if you lump all Muslims in the world in with the terrorists. Trump can shrug this off now because he’s just a candidate. He won’t be able to shrug it off if (Heaven forbid) he becomes commander-in-chief.