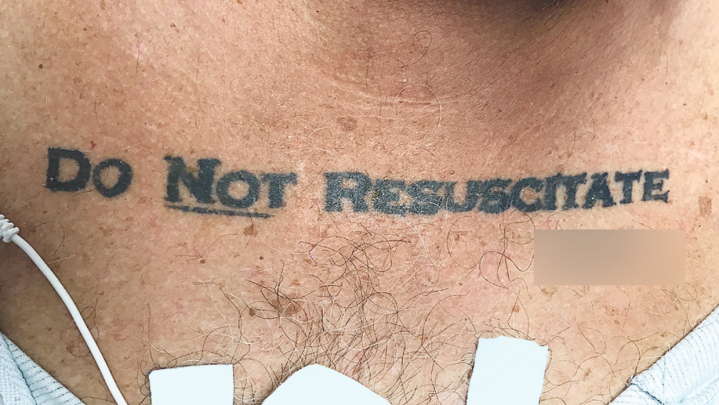 When a patient is suffering a life-threatening condition and is rushed to the hospital, doctors are supposed to do everything in their power to save a life. That’s how it works most of the time anyway, but when an unconscious elderly man showed up in the emergency room with “Do Not Resuscitate” tattooed across his chest, medical staff were left struggling to decide what to do.

The case, which is detailed in a recent installment of the New England Journal of Medicine, centers around an unresponsive diabetic patient who arrived at a Florida hospital with an elevated blood-alcohol level. University of Miami doctors began working to save his life immediately, but were taken aback by the words they saw written below the man’s collarbone.

In many states, including Florida, any individual of sound mind can choose to meet their maker and forego medical treatment in the event of a life-threatening accident, illness, or ailment. Individuals choose that route for a variety of reasons, including religious beliefs, the desire to avoid being dependent on machine-aided life support, and even due to the potential burden of surviving the ordeal and being left with a mountain of medical debt. Unfortunately, a tattoo isn’t exactly a legal document, and doctors were left with an ethical conundrum.

Was the tattoo just a joke? Or perhaps a decision he had made in his youth which he had since changed his mind about? The staff had no way of knowing, and the unresponsive patient obviously couldn’t clear things up for them. At least one prior case of a “Do Not Resuscitate” tattoo, the man’s life was saved when the doctors ignored the message, and the patient later explained that the tattoo was merely a joke that he didn’t think anyone would take seriously.

At first, the staff attempted to perform life-saving intervention, but after consulting with medical ethics experts the decision was made to allow the man to pass. With such little time to make their decision, the ethics consultants decided that the tattoo represented the man’s true wishes. He died in the hospital that same night.

Thankfully, it seems the decision was indeed the correct one, as the doctors were able to locate an official Do Not Resuscitate request order that he had previously filed with the Florida Department of Health.

Tags: do not resuscitate health medical