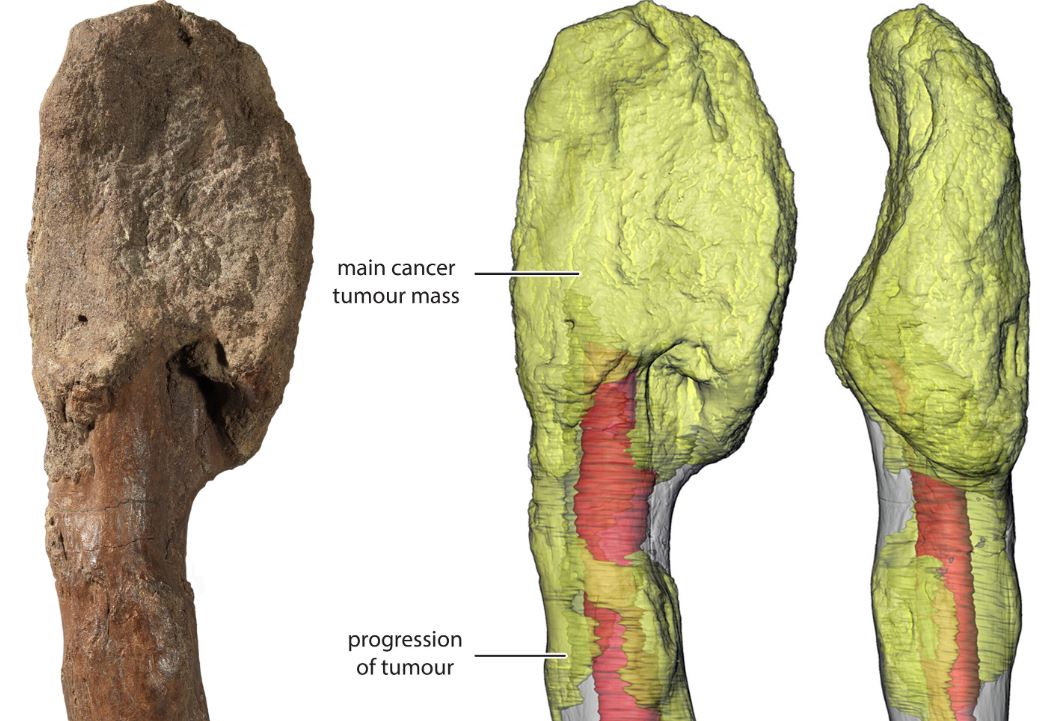 Dinosaurs lived in a time where dangers lurked around every corner. The food chain dictated who lived and who died, and for plant-eaters, avoiding hungry carnivores was of utmost importance. We don’t often think of dinosaurs suffering from medical conditions, but they were animals all the same, and a new study reveals that when they weren’t dodging sharp teeth, they even battled cancer.

The research, which was published in the journal The Lancet Oncology, reveals that a dinosaur specimen suffered from a severe form of bone cancer some 77 million years ago. The creature was a Centrosaurus apertus, a herbivore that would have spent its days grazing and avoiding predators. Unfortunately, this particular dino had to do so with a seriously messed up hind leg.

The cancer was malignant, meaning that it was capable of spreading to other parts of the dinosaur’s body, including vital organs. At first, however, the researchers examining the fossils didn’t realize what they were looking at. The bone where the cancer was festering was malformed, and the scientists believed the build-up of mass was simply the bone healing from prior damage.

The bone was then examined by a whole team of experts specializing in everything from radiology to orthopedic surgery. What the team found was that the growth was indeed a massive bone tumor, and that it was an aggressive form of cancer.

“Diagnosis of aggressive cancer like this in dinosaurs has been elusive and requires medical expertise and multiple levels of analysis to properly identify,” Dr. Mark Crowther, co-author of the study, said in a statement. “Here, we show the unmistakable signature of advanced bone cancer in 76-million-year-old horned dinosaur—the first of its kind. It’s very exciting.”

The dinosaur’s cancer was at “an advanced stage,” the scientists say, and it would have made it difficult for the animal to move efficiently, potentially leaving it open to attacks from other dinosaurs. However, the cancerous bones were found in a large “bone bed” along with many others from the same species. Paleontologists believe it was one member of a herd that died during a flood. It was that herd lifestyle that may have allowed the dinosaur to persist despite its debilitating condition.

“The shin bone shows aggressive cancer at an advanced stage. The cancer would have had crippling effects on the individual and made it very vulnerable to the formidable tyrannosaur predators of the time,” Dr. David Evans explains. “The fact that this plant-eating dinosaur lived in a large, protective herd may have allowed it to survive longer than it normally would have with such a devastating disease.”