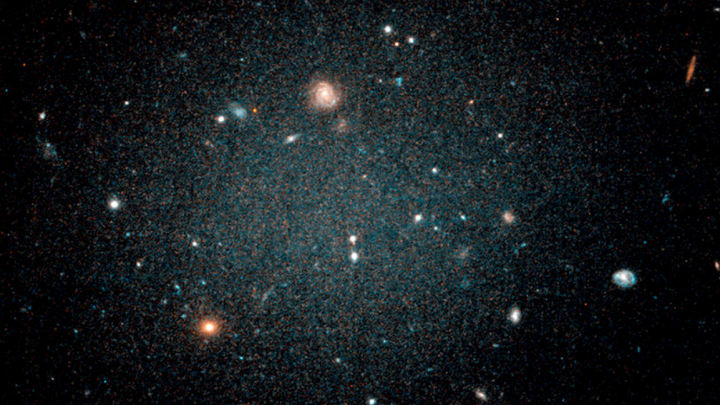 In attempting to explain how the universe works, scientists have largely settled on the existence of a mysterious type of matter known simply as “dark matter.” We’ve never observed it directly, but we can see the effects of its gravity throughout the universe, and it’s thought to be a huge component of every galaxy that researchers have ever studied. That is, except for one. In a new research paper published in Nature, scientists reveal the discovery of a bizarre galaxy that appears to have no dark matter at all, and it’s throwing long-held theories of galaxy creation into question.

The research team, led by scientists at Yale, describes the study of a far-off galaxy called NGC 1052-DF2. Using observations from the Hubble Space Telescope and the Dragonfly Telephoto Array, the team discovered that the galaxy appeared dramatically different than others they had seen. It wasn’t long after that they realized it was missing one of the things that, according to all prior research, makes galaxies tick: dark matter.

“This invisible, mysterious substance is the most dominant aspect of any galaxy,” Pieter van Dokkum, a Yale professor and lead author of the study, explains. “So, finding a galaxy without it is unexpected. It challenges the standard ideas of how we think galaxies work, and it shows that dark matter is real. It has its own separate existence apart from other components of galaxies. This result also suggests that there may be more than one way to form a galaxy.”

The researchers describe the galaxy as looking like “a diffuse blob sprinkled with very compact star clusters.” The stars were moving very slowly, which seemed odd to the scientists since they expected to see speeds up to three times greater. Those expected speeds factor in the existence of dark matter and its gravitational effects, but because the scientists believe all the gravity present in the galaxy is accounted for by the mass of the stars, there must be no (or at least very, very little) dark matter present there.

“I spent an hour just staring at the Hubble image,” says van Dokkum. “It’s so rare, particularly these days after so many years of Hubble, that you get an image of something and say, ‘I’ve never seen that before.’ This thing is astonishing, a gigantic blob that you can look through. It’s so sparse that you see all of the galaxies behind it. It is literally a see-through galaxy.”

This is a huge first for astronomy, as it demonstrates that galaxies can exist without the presence of dark matter whatsoever. However, the discovery has led to more questions than answers, and further research into how a galaxy might form in the absence of dark matter will need to be undertaken before it is fully understood.