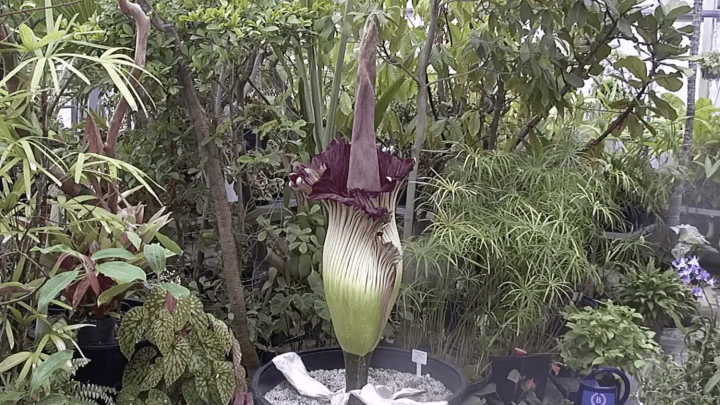 With people still practicing social distancing and self-isolation in many places around the planet, live streaming has seen a big boost in interest. At New York City’s Barnard College, the Arthur Ross Greenhouse is home to a very special and very stinky plant. It’s a massive “corpse plant” (Amorphophallus titanum) that is blooming for the first time, and it’s the star of its very own live stream.

The corpse plant is absolutely huge. As LiveScience reports, it was given to the greenhouse as a gift from the Brooklyn Botanical Garden seven years ago. At that point, it weighed merely a pound and was just a bulb. Today, the colossal plant weighs over 40 pounds and stands over five feet tall. Yeah, it’s big.

Corpse plants are unique for a number of reasons, not least of which is their incredibly odd odor. The flower that the plant produces features what has been described as a “fleshy upright column” called a spadix, but you’re more likely to smell the plant before you spot it with your eyes. As the name suggests, the odor the plant puts off has been compared to that of rotting flesh. Fans of the plant say it’s not all bad, but we’ll have to assume its something of an acquired taste, er, smell.

You might wonder why a plant flowering would warrant a live stream. Well, planting a corpse plant in the ground doesn’t guarantee you’ll still be around to see it bloom. It can take up to a decade for the plant to reach maturity and generate a flower. When it’s finally ready to bloom, it grows tall, with a leaf-covered tower stretching high above the ground. When it blooms, it pulls the leafy covering away to reveal the “fleshy column” inside.

The iconic smell of the corpse plant doesn’t last long and tends to fade after a few days. Once the plant is done blooming — a process that can last a month or longer — it will wither and most of it will die off. The tuberous structure that remains underground can still bloom again, but that means waiting for another long stretch.

You can watch the live stream via the YouTube window embedded above. It’s not exactly action-packed, but it’s still pretty interesting to see, especially knowing how rare it is for each corpse plant to actually bloom. Oh, and you don’t have to deal with any of the stink, which is a nice bonus.