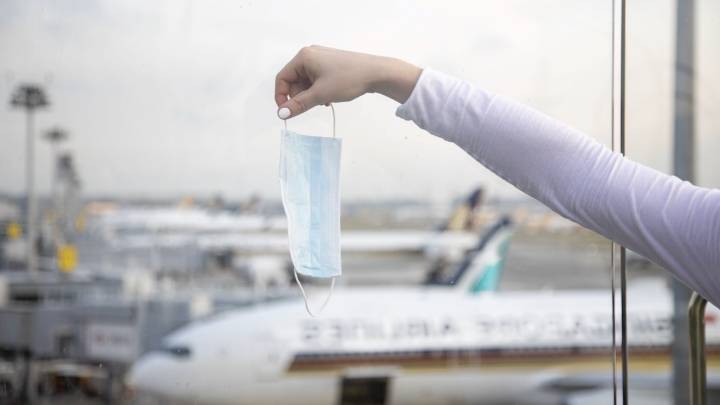 The novel coronavirus spreads mainly via droplets, but researchers have proven that they become aerosols while speaking and also favor transmission. Those aerosols allow the virus to spend more time in the air, and the World Health Organization (WHO) has already acknowledged that airborne spread is possible. Add to that the theoretical risk of getting infected from touching surfaces that are contaminated, and you’ve got three reasons to avoid being trapped with other people in an air-conditioned box flying through the sky. Airlines have tried to reassure customers that flying is safe and have implemented several measures to reduce the spread of COVID-19 aboard their planes. While those precautions can indeed lower the risk, no measure can eliminate it.

The good news is that we now have a first study that shows what happens on a plane when some of the passengers happen to be COVID-19 carriers, and when no safety measures are applied. As it turns out, the risk is a lot lower than many people would have thought.

Researchers from Germany analyzed the behavior of the virus by looking at all the passengers who boarded a commercial flight from Tel Aviv, Israel, to Frankfurt, Germany, on March 9th, 2020. At the time, face mask use wasn’t as widespread and airlines did not require face coverings for all passengers. Moreover, airlines were not implementing stricter safety measures aboard their planes, as is the case now.

24 members of a tourist group were among the 102 passengers on the plane, and the flight duration was 4 hours and 40 minutes. The group had contact with a hotel manager seven days before the flight who was later confirmed positive. The members of the group were not tested before boarding the plane, and none of them were wearing masks.

When the passenger plane landed, the 24 people were all tested for COVID-19, and the scientists contacted all the other passengers four to five weeks later to see whether they had contact with other COVID-19 patients and whether they developed any symptoms consistent with an infection. All the passengers who were seated within two rows of the index cases and the ones who were symptomatic were offered antibody tests as well. The index cases included seven people of the 24-person group. They tested positive for the novel coronavirus upon landing. Four of them were symptomatic during the flight, two were presymptomatic, and one was asymptomatic.

Of the 78 passengers who had been exposed to the group, 71 completed interviews. The researchers say that 13 of them gave serum samples six to nine weeks after the flight, and one person reported having tested positive via a regular PCR test four days after the trip.

In total, the researchers think that only two people caught COVID-19 on the plane, but they have no way of proving that they were infected while they were on board as opposed to somewhere else in the airport. The researchers also note that other limitations include the inability to get answers from the crew of the airplane and the lack of antibody testing for many passengers.

“We discovered two likely SARS-CoV-2 transmissions on this flight, with seven index cases,” the study reads. “These transmissions may have also occurred before or after the flight. The risk of transmission of droplet-mediated infections on an aircraft depends on proximity to an index case and on other factors, such as movement of passengers and crew, fomites, and contact among passengers in the departure gate. In our study, both passengers with likely onboard transmission were seated within two rows of an index case.”

The scientists noted that it was previously observed that SARS and influenza transmission is possible beyond the two-row perimeter. They also highlighted the airflow in the cabin as a factor that may have reduced transmission, and they said masks could have further reduced the spread. “The airflow in the cabin from the ceiling to the floor and from the front to the rear may have been associated with a reduced transmission rate,” they said. “It could be speculated that the rate may have been reduced further had the passengers worn masks.”

The authors acknowledge that additional transmission may have occurred given the uncertainties about many of the other travelers and the crew. The study does not rule out coronavirus airborne transmission inside an airplane cabin, of course. More research will be needed to explain the true risk of COVID-19 transmission in airplanes.