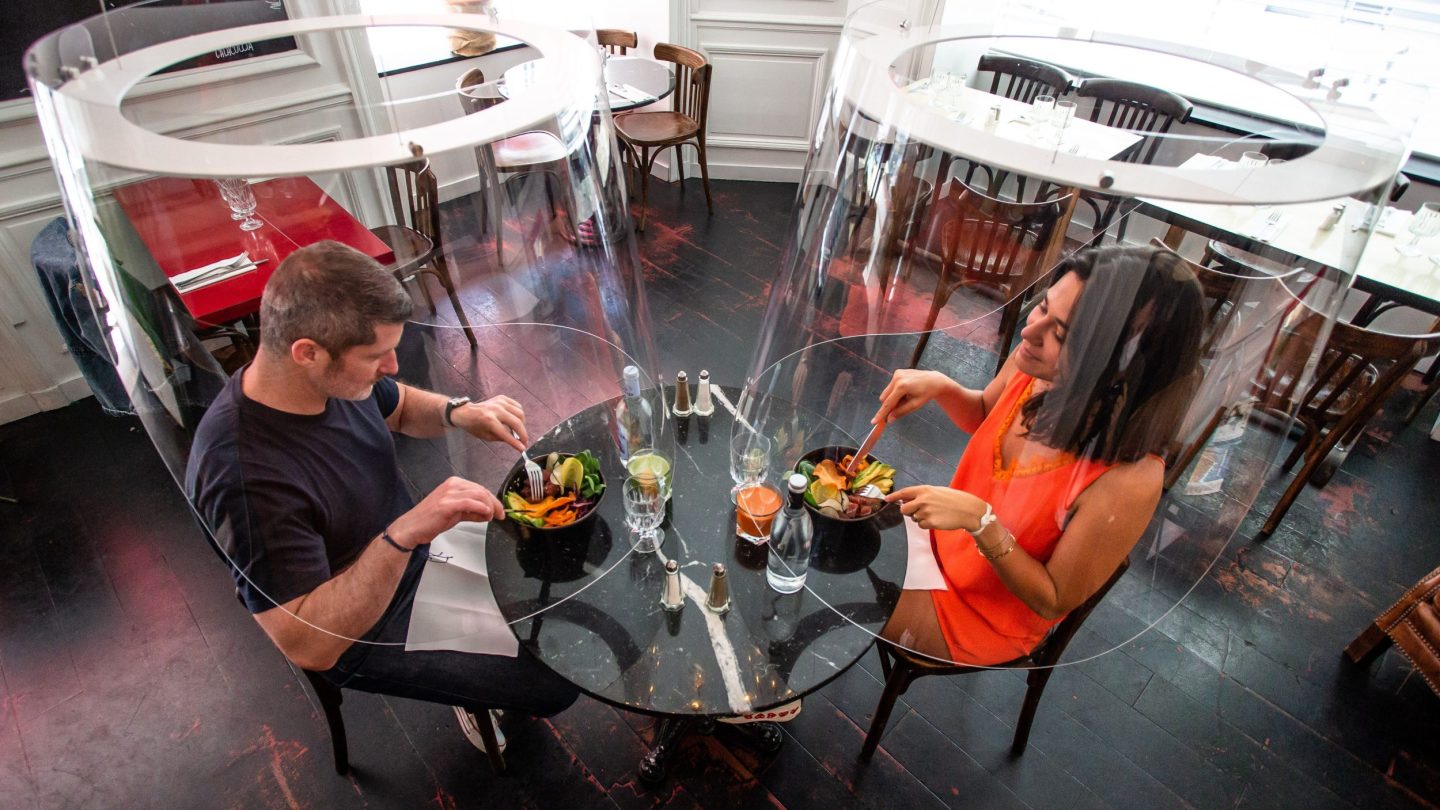 The coronavirus pandemic has affected the restaurant industry in some severe and profound ways. Dining rooms were shuttered nationwide and eateries were forced to mobilize delivery options as fast as possible. Now, as restrictions in some regions begin to loosen, restaurants are forced to come up with new ways of protecting their patrons and preventing the dreaded second wave of new infections.

Once French designer has come up with what he believes is a solution to the problem. It looks a little bit odd, but the so-called “Plex’Eat” dining cylinder is designed to act as a protective shield that blocks the spread of the coronavirus and other airborne illnesses while still allowing you to eat out with friends and family.

It’s an incredibly simple design. A rigid disk holds a flexible pane of plastic in a cylindrical shape around each guest. They can still enjoy the food in front of them and see their dining partner, but airborne particles are prevented from circulating.

The downside to this approach is that it may be a bit more difficult to carry on a conversation with someone in another pod. The tops of the cylinders are open, so you could conceivably still hear them, but it won’t be like talking to them face-to-face.

Another potential issue is the fact that the cylinders don’t appear to leave much room on the table for extra dishes or drinks. In photos of the Plex’Eat prototype, people seem to be limited to one dish and one drink, leaving much of the table bare. It might also be a chore to share things like salt and pepper shakers.

According to its inventor, Christophe Gernigon, interest in the Plex’Eat have already come in from restaurants in France, Belgium, Japan, and Canada. He plans on putting the design into production soon and will begin selling the dining accessories as soon as possible.

There are a couple of ways to look at this whole thing. First, if you favor getting “back to normal” as fast as p[ossible, a plastic cylinder you eat inside of while dining at a restaurant allows you to return to your routine of going out, but how normal is it, really?

The other angle is that if you have to eat inside a plastic shield in order to prevent yourself from contracting and possibly spreading an illness that has proven deadly in hundreds of thousands of people, should we maybe just wait for the vaccine and maintain our social distancing efforts before going through all of this trouble?