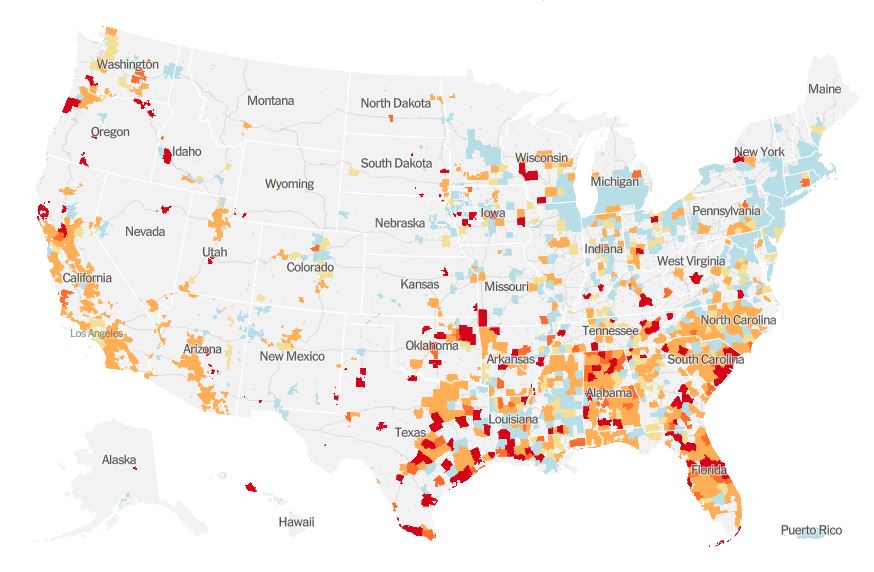 2020 has thrown some serious curveballs at all of us. The coronavirus pandemic was at the top of everyone’s minds for months, but as states have started to roll back their restrictions, life is beginning to look a little bit more “normal” than before. That’s not necessarily a good thing, however, as the lack of restrictions is resulting in spikes of new cases in some states, while other states continue on a downward trend.

A powerful tracking tool provided by the New York Times offers us a clear look at which states seem to be doing a better job of keeping the virus under control and which ones are seeing a steady (or in some cases sharp) increase in new cases.

As we can clearly see by the day-to-day tracking of newly reported cases, many states in the south are suffering dramatic increases in confirmed COVID-19 tests. As you might expect, a lot of these states are the same ones that were quick to begin rolling back restrictions regarding public gatherings and social distancing.

At the moment, Arizona, Florida, Texas, and Alabama are being hit the hardest, but an uptick in new cases is also a concern in Louisana, North Carolina, Georgia, and California.

As for the states that are keeping things stable, with neither a dramatic uptick nor a noticeable downward trend, Ohio, Indiana, Tennessee, Washington, Mississippi, Missouri, Kentucky, and South Dakota all make the list.

The states have may have already seen their peak and are now on the downswing include New York, New Jersey, Illinois, Massachusettes, Pennsylvania, Michigan, Maryland, and Virginia. These are also some of the states that were initially hit the hardest but have also kept lockdown guidelines in place for longer.

Okay, so the United States is a mixed bag as far as which states are doing a good job of testing and identifying cases, and ensuring that more people don’t become infected. The overall good news is that while the figure of newly confirmed cases is remaining relatively stable, the number of deaths resulting from those cases appears to be on a very noticeable downward trend.

Of course, that “good news” comes with the caveat that we’re still seeing hundreds of new deaths from the virus every single day, down from thousands when it was at its nationwide peak. If we truly want to ensure we don’t suffer a second wave of the pandemic, the states that are now seeing an uptick in cases will need to act fast to prevent themselves from becoming the next big viral hotspot.