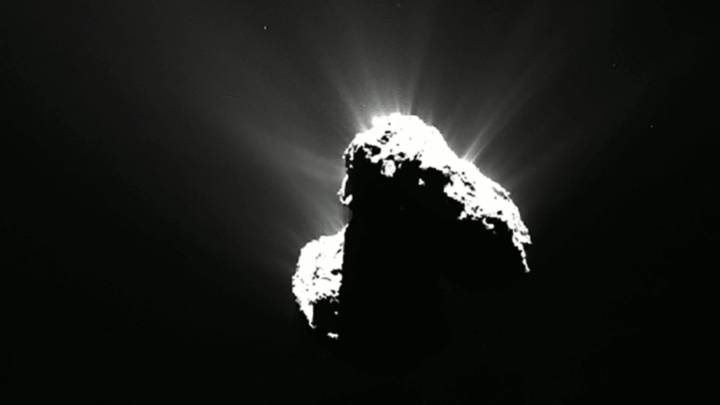 On Earth, if you live near one of the poles you’re probably familiar with the aurora. The “Northern Lights” (or Southern Lights if you’re on the other end of the planet) are a result of charged particles from the Sun slamming into Earth’s atmosphere and being funneled along toward the poles by Earth’s magnetic field.

We know that planets have auroras, and auroras are even present on large moons, but never before has an aurora been observed on a much smaller object. That is, until the Rosetta spacecraft, a joint mission between NASA and the European Space Agency which was launched way back in 2004, spotted a strange glow coming from comet 67P/Churyumov-Gerasimenko.

As NASA explains in a new blog post, the discovery came as researchers began studying images of the comet and realized the faint glow that appeared to be coming from behind the object was actually being produced by it. The aurora isn’t visible to the naked eye, and it’s only seen using far-ultraviolet detection technology, but it’s there, and it’s the first time an aurora has been seen around anything other than a planet or moon.

The glow is generated by interactions between charged particles from the Sun and the material streaming from the comet itself. The particles react with the molecules in such a way as to generate this far-ultraviolet light.

“The glow surrounding 67P/C-G is one of a kind,” Marina Galand, lead author of the study, said in a statement. “By linking data from numerous Rosetta instruments, we were able to get a better picture of what was going on. This enabled us to unambiguously identify how 67P/C-G’s ultraviolet atomic emissions form.”

That’s pretty awesome, and it shows that even though we think we know a lot about objects like asteroids and comets, we’re really only just now scratching the surface. Having a better understanding of objects react in the constant outflow of charged particles from the Sun (called the solar wind) will also be beneficial when it comes to exploring space, if that’s something we’re eventually able to do.

“Rosetta is the gift that keeps on giving,” Paul Feldman, co-author of the paper, said in a statement. “The treasure trove of data it returned over its two-year visit to the comet have allowed us to rewrite the book on these most exotic inhabitants of our solar system — and by all accounts there is much more to come.”