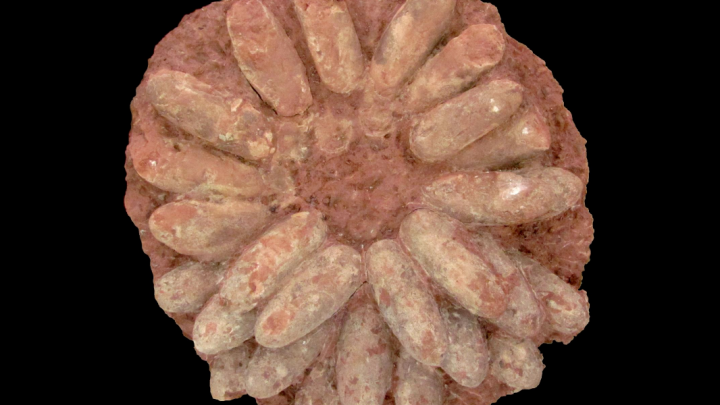 Many modern birds perch atop their eggs in order to keep them warm and safe from the elements. Doing so gives the species an edge and increases the chances of successful hatching. But what if the bird doing the sitting weighs over 3,000 pounds? That’s a question that an international team of researchers attempted to answer in a new study published in Biology Letters.

Oviraptorsaurs — a group of bird-like dinosaurs that includes species which top out at over 3,000 pounds — were true giants of the animal kingdom. The creatures, which lived around 67 million years ago, laid large eggs in clutches on the ground, and that meant that someone had to protect them. But how does an animal that large sit on a nest without crushing its own offspring?

After studying over 40 fossilized nests from different oviraptorsaur species the researchers discovered that sometimes the parents didn’t sit “on” their eggs at all. The nests, in which the eggs are laid and arranged like spokes on a tire, were seemingly designed to allow one of the parents to sit in the middle of the clutch without damaging them.

The larger the species, the larger their eggs, and the size of the gap in the center of the nest matches the adult’s size as well. The strange, elongated egg shape seems to aid in their arrangements, possibly preventing them from rolling around and becoming disorganized.

What’s particularly interesting about this is that it suggests that the primary job of the parent in this case was to protect the eggs from predators rather than warm them with their own bodies. Smaller species may have been able to sit on their eggs, but the larger ones would have had little or no contact with the eggs at all. The researchers suggest that this indicates the incubation behavior seen in modern birds was carried through to today by a different evolutionary line, and not from oviraptorsaurs.

“Our results suggest that the smallest oviraptorosaurs probably sat directly on the eggs, whereas with increasing body size more weight was likely carried by the central opening, reducing or eliminating the load on the eggs and still potentially allowing for some contact during incubation in giant species,” the paper explains.