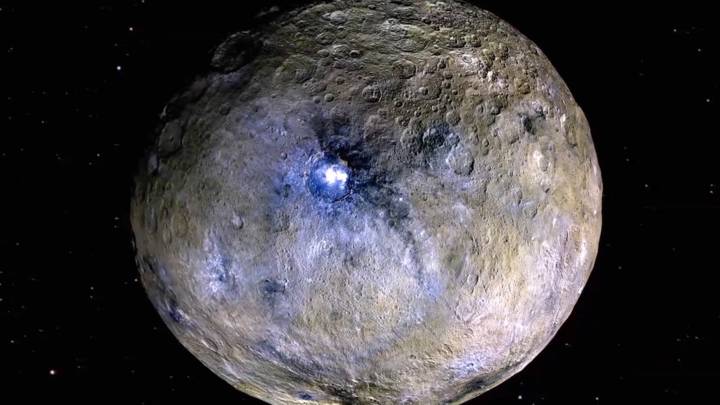 When it comes to water in our solar system, there’s only one planet that we know of that has water in abundance on its surface. We happen to live on it, and it’s a major reason why we’re here to begin with. However, over time we’ve slowly learned that other icy bodies in our little stellar neighborhood also have lots and lots of liquid water, but it just happens to be hiding deep beneath thick sheets of ice.

We know that the moons Enceladus and Europa both have massive subsurface oceans that are heated by tidal forces and may even have the ingredients to support life. That’s pretty exciting stuff, and now we can add another world to that same list: the dwarf planet Ceres.

Ceres is a large, icy world that resides in the asteroid belt between Jupiter and Mars. It’s not quite big enough to be a planet, but that doesn’t mean it doesn’t have some interesting things to share with us. In a new series of studies published in Nature this week, researchers explain that they’ve discovered evidence of a massive subsurface ocean of salty water resting beneath the dwarf planet’s icy shell.

“The surface and internal structure of Ceres show evidence of a global process of aqueous alteration, indicating the existence of an ocean in the past. However, it is not clear whether part of this ocean is still present and whether residual fluids are still circulating in the dwarf planet,” the researchers write, describing that they found evidence of the recent deposition of minerals on the dwarf planet’s surface.

“The spatial distribution of the hydrated phase suggests that chloride salts are the solid residue of deep brines that reached the surface only recently, or are still ascending. These salts are very efficient in maintaining Ceres’s warm internal temperature and lowering the eutectic temperature of the brines, in which case ascending salty fluids may exist in Ceres today.”

As humans continue to explore the solar system and dream of finding evidence of past or present life, focusing on ocean worlds and exploring their potential to host life could be our best bet. The issue, of course, is that we’ve never sent a mission to any of these worlds in search of life, and doing so would mean inventing new ways of detecting what’s happening deep beneath the frosty surface. That could mean digging very, very deep and then exploring the oceans themselves, or analyzing the water that spews from cracks and fissures in their surface.