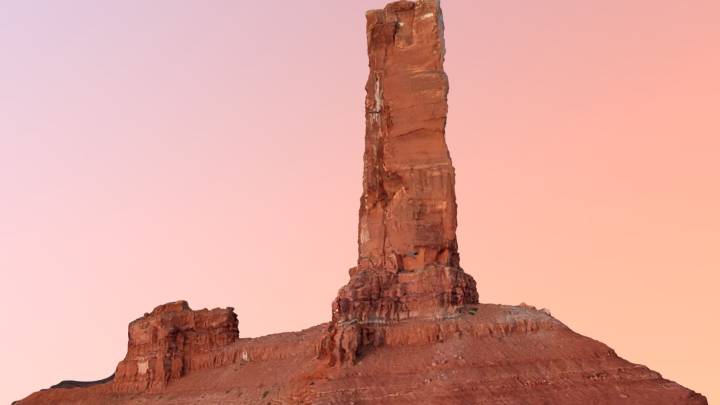 A popular rock-climbing destination in Utah, Castleton Tower dominates the surrounding landscape, standing nearly 400 feet tall like a stone skyscraper. It’s a gorgeous sight and, as researchers from the University of Utah just discovered, it is incredibly in tune with our planet.

Geologists from the school recently studied the massive stone pillar, using seismic sensors to better understand how the rock has withstood the forces of nature for so long. The tower, it turns out, vibrates in sync with the Earth, and it’s that resonance frequency that likely protects it from potentially devastating events such as moderate earthquakes.

“Most people are in awe of its static stability, in its dramatic freestanding nature perched at the end of a ridge overlooking Castle Valley,” Jeff Moore, lead author of the study published in Bulletin of the Seismological Society of America, said in a statement. “It has a kind of stoic power in its appearance.”

Using sensors mounted on the rock, the research team was able to isolate two resonant frequencies — 0.8 and 1.0 Hz — and determined that the rock sways back and forth approximately once every second. Contrary to what one might assume, this natural rocking motion is actually a boon when it comes to protecting the tall structure from collapse during a seismic event.

Based on their readings, the team believes the tower’s vibration would be largely unaffected by many potential sources of seismic disruption, including mild earthquakes. However, that’s not to say the colossal pillar will remain standing forever, and the researchers are quick to note that features like Castleton Tower are ever-changing.

Going forward, the team believes the measurements and modeling they’ve been developing may play a major role in determining the geological health of many different natural structures, helping us better understand what forces impact specific monuments over the long and short term.