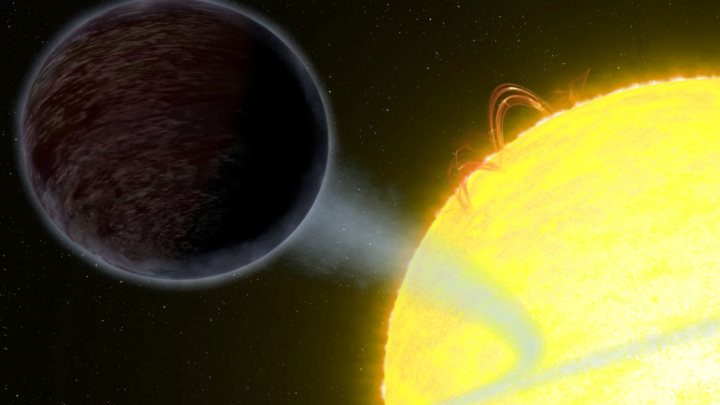 When you imagine planets outside of our solar system you might dream up ocean worlds, thick plains of ice, or boiling seas of molten rock. Worlds like those certainly do exist out there somewhere, but the exoplanet known as WASP-12b most definitely doesn’t fall into any of those categories. A new research effort to study the planet hasn’t exactly revealed what it’s made of, but it has discovered that the planet is the blackest of blacks, and reflects so little sunlight that not even freshly-laid asphalt can compare.

The researcher team, which was led by researchers from McGill University in Canada and the University of Exeter in the UK, used the Hubble Space Telescope to catch a glimpse of WASP-12b in the hopes of learning more about it. What they soon realized was that the planet is so impossibly dark that it almost completely blends in to the darkness of space.

Using the Hubble’s built-in spectrograph, the scientists were able to measure the amount of light the planet reflects, called albedo, and found it to be a incredibly low. “The measured albedo of WASP-12b is 0.064 at most. This is an extremely low value, making the planet darker than fresh asphalt! The low albedo shows we still have a lot to learn about WASP-12b and other similar exoplanets.”

Now the task of determining exactly why the planet is so dark begins. Researchers have theorized that the planet’s close proximity to its star could be responsible. WASP-12b is twice the size of Jupiter and is so close to its star that it completes a full rotation in about one Earth day. That short distance means that the planet’s surface could top 2600 degrees Celsius, which may mean its atmosphere is actually responsible for absorbing so much of the light that hits the planet.

The “goth” planet and its star are located some 1,400 light years away from Earth, so it’s not exactly feasible to go check it out for ourselves. For now we’ll just have to wait and wonder.