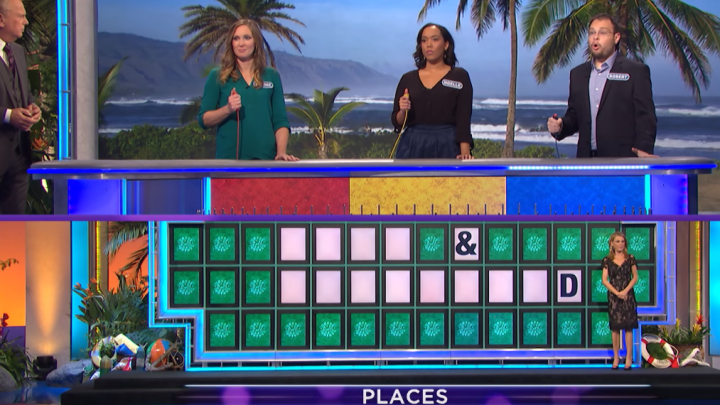 I’ve seen a lot of very impressive Wheel of Fortune contestants over the years but I don’t think I’ve ever seen anyone quite as good as Robert Santoli, a recent Wheel contestant who started the game by solving an entire puzzle with only one letter and then went on to crush any and all opposition on his way to victory. This has to be seen to be believed.

First of all, yes Santoli really did somehow figure out that the solution to this puzzle…

…was “Port and starboard” with the help of just the letter “D” at the end.

His next victim was this puzzle, which he quickly discerned was “Oh, What a Night”

Then came “Don’t let the cat out of the bag”…

Then came the final puzzle, which was “Goofy pictures”…

On the night, Santoli won a total of $76,000, while his opponents only won the nation’s pity.

In case you’re wondering just how Santoli managed to pull this off, he apparently spent days preparing for this competition and made lists of possible puzzle solutions. In particular, he noted that this particular episode was being sponsored by Carnival Cruise Line, which led him to believe there would be at least one kind of boat-related puzzle that he’d have to solve.

“The instant I got my theme, I immediately came up with an ever-growing list of puzzles themed towards cruises, sailing, fish, boats, anything on or in the water,” he explains. “Some I came up with in my head right away, like ‘PORT AND STARBOARD’  and ‘POPEYE THE SAILOR MAN.’ I opened up MS Word and began typing anything that came to mind. Then, I went to this extensive WOF episode guide and did a Ctrl-F search for ‘Cruise,’ ‘Fish’ and ‘Sea’ and made note of the dates. Then I went to the compendium and wrote down all the themed puzzles from those weeks, marking such puzzles with an asterisk to note that they had been previously used on the show. I then alphabetized the list to organize it by category.”

Given this level of preparation, his rivals shouldn’t feel too sorry about their performances. After all, it seems that they never really had a chance.

To read the full, very lengthy explanation for how Santoli prepared for this game, check out his full post at this link.