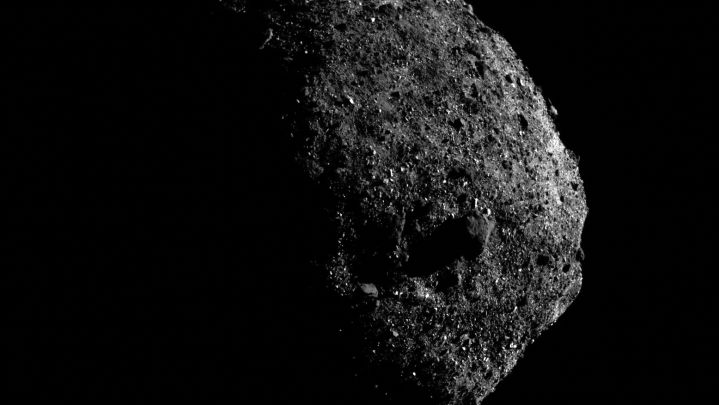 NASA’s OSIRIS-REx asteroid probe is now in a holding pattern after a lengthy mission that visited the space rock known as Bennu. The probe is still in the vicinity of the asteroid that it sampled many months ago, and before it heads back to drop off its sample containers, NASA did a close flyby of the rock and captured a snapshot of the mark it left when it performed its most dangerous maneuver. In a new post by NASA, the space agency showcases the images and celebrates the mission’s many achievements.

During a flyby of the asteroid on April 7th, the probe reached a distance of just 2.3 miles from the asteroid’s surface. It took multiple photos of the shallow crater that the spacecraft created when it performed its “Touch-and-Go” (TAG) sample collection event way back in late October 2020.

The image below shows two images of the site where the sample was collected, it’s a nice before-and-after comparison that shows you just how much the landscape changed. The spacecraft descended toward the surface of the rock and blasted it with pressurized gas to create a create within which the probe’s sampling instrument grabbed fresh subsurface material. The result is a dark area and clear signs of disturbance.

“Bennu is rough and rocky, so if you look at it from a different angle or capture it at a time when the sun is not directly overhead, that dramatically changes what the surface looks like,” OSIRIS-REx team member Dathon Golish said in a statement. “These images were deliberately taken close to noon, with the Sun shining straight down, when there’s not as many shadows. These observations were not in the original mission plan, so we were excited to go back and document what we did. The team really pulled together for this one last hurrah.”

The spacecraft will hang out around the asteroid until next month when it will finally begin its long trip back to Earth. It is expected to release the sample capsule during a flyby of Earth in late September 2023, at which point NASA has some big plans for it.

Once recovered, the capsule will be transported to the curation facility at NASA’s Johnson Space Center in Houston, where the sample will be removed for distribution to laboratories worldwide, enabling scientists to study the formation of our solar system and Earth as a habitable planet. NASA will set 75% of the sample aside for future generations to study with technologies not invented yet.

It will be one of just a few asteroid samples transported back to Earth, and it’ll surely have some interesting secrets to reveal. We’ll have to wait years to see what it holds, but we have to believe the wait will be worth it.