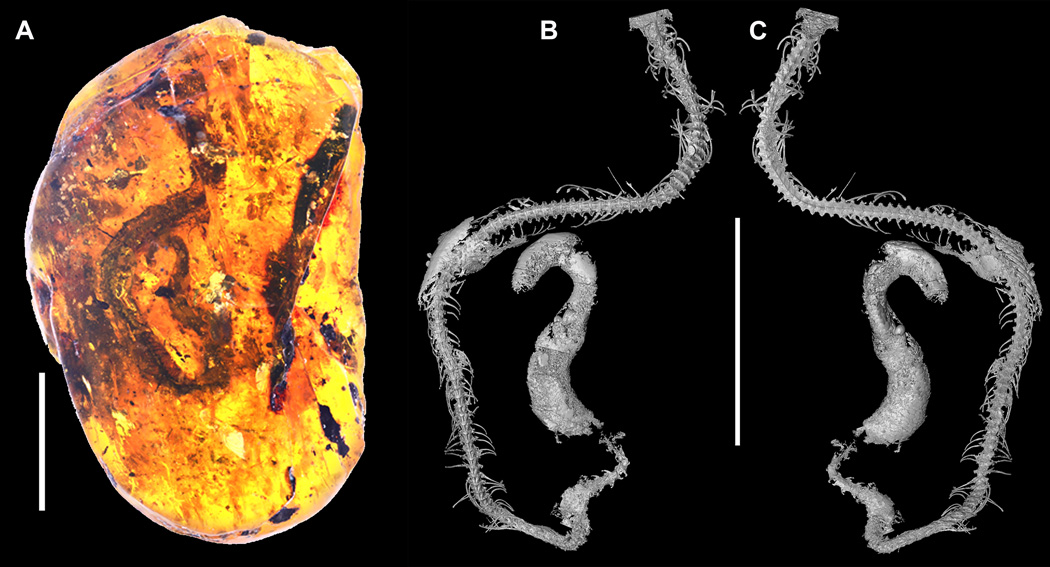 If you were to travel back in time about 100 million years you’d see a whole lot of things that you can’t see today. Dinosaurs roamed the land and those would have been pretty neat to see in person, but something slithering beneath your feet would have looked a lot like it does today: the snake.

Now, the discovery of a baby snake in present day Myanmar is helping researchers to better understand how snakes have changed over millions and millions of years. The fossilized remains of the tiny snake, encased in amber, are thought to be around 99 million years old, and it offers a rare window into the distant past. The research was published in Science Advances.

Snakes are incredibly successful creatures. They’re one of the few examples of an evolutionary line that has been able to endure the worst hardships planet Earth has ever seen, remaining largely unchanged for massive stretches of time. This particular specimen, nicknamed the “Dawn Snake of Myanmar,” would have lived in the shady forests of the Cretaceous period.

This was the same time that hulking beasts like the Tyrannosaurus, Triceratops, and Spinosaurus were dominating the planet, and this newly-discovered juvenile snake would have seemed incredibly tiny by comparison. The little hatchling measured less than two inches long, which matches up with some species of snake that we see today, but the fossil isn’t totally complete.

The body of the little creature is now missing its head. The scientists aren’t quite sure why or how the snake was decapitated, inviting images of a dinosaur chomping down on the pint-sized snake as it tried its best to escape, but it’s equally likely that the remains of the snake had begun to fall apart before the tree sap managed to smother it.

It’s the first example of a dinosaur-age snake that clearly lived on the forest floor, and that’s significant for a number of reasons. The fact that snakes have remained mostly the same for so long means that they must be doing something very right, and discovering how snakes took to different environments allows scientists to better explain why they have defied extinction again and again.