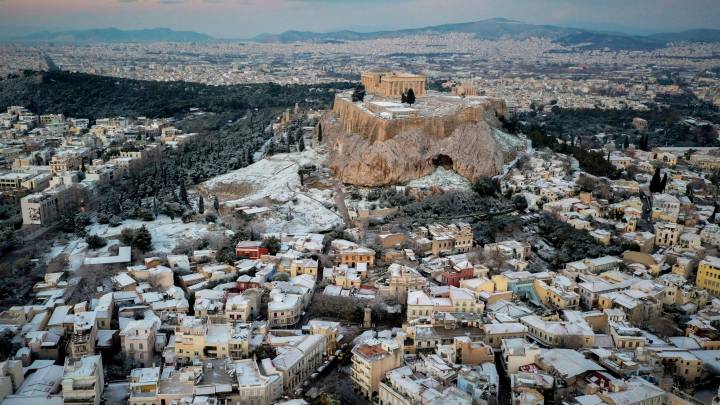 As it always does, winter has covered many parts of the world in a dusting of snow to start the year. Last week we were treated to some lovely images of a rare substantial snowfall in Arizona and New Mexico, and now we’re seeing a similarly special sight in Greece, where snow has blanketed the capital of Athens and given its historic structures a winter makeover.

As Reuters reports, Greece has been slammed with record low temperatures this week, causing major problems for residents while also creating some lovely photo ops. Public transportation is seeing delays and schools took the day off while the city dealt with the bizarre weather.

It’s not often we get to see the ruins of iconic monuments like the Acropolis covered in snow, and photographers have wasted no time in capturing the beautiful sights.

Acropolis of Athens in snow. pic.twitter.com/NliwuuRey1

Snow at the Temple of Zeus and the Acropolis in Athens, Greece today. Jo pic.twitter.com/1EKStHCWRw

The Zappeion Megaron in the snowy Athens.* pic.twitter.com/q2y4oI37pq

The snow certainly gives Athens a special look, but it’s not all smiles and snapshots in Greece this week. Officials have said that at least three people have died as a result of the cold snap, and emergency personnel have reportedly been dealing with an influx of calls from people who are stranded either in their cars or even inside their homes after heavy snow blocked their exit.

Temperatures dipped as low as -9 degrees Fahrenheit in parts of the country, with snow leading to highway closings and train downtime. Temperatures in Athens have since bounced back to their more temperate norm but other areas of the country are still trying to get back on their feet. The capital isn’t expected to dip back below freezing for the foreseeable future.