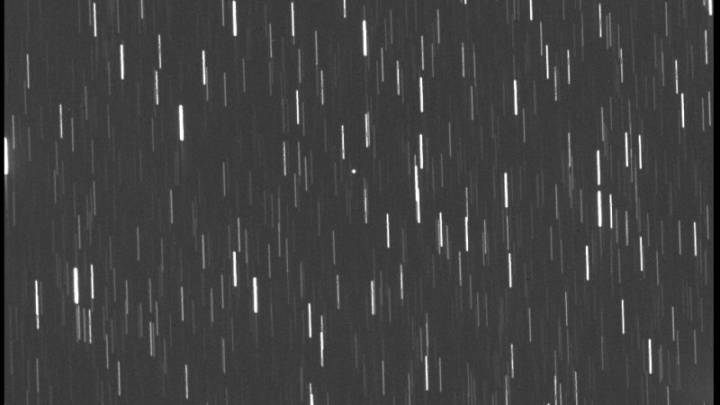 Just after 6PM this evening, an asteriod the size of a city block will zing past the Earth, travelling at around 8 miles per second. It’s passing closer than large asteroids typically do, but remember, when you’re talking about space, “close” is a relative term. It will be shooting the gap between the Moon and Earth, passing around 126,419 miles away from Earth, which is far enough that no one is worried about a collision.

Astronomers first discovered the asteroid, 2010 WC9, on November 30th 2010, but lost sight of it soon after. “We knew that it would likely come close in May of 2018. We didn’t know how close, but we had ruled out any chance that it would hit the Earth,” Paul Chodas, manager of the Center for Near Earth Object Studies at NASA’s Jet Propulsion Laboratory, told CBC.

The asteroid is estimated to be between 50 and 100 meters wide, but could be even larger. An asteroid of that size collides with the Earth once every few thousand years, causing some damage if it falls in a populated area, or explodes in the sky like the asteroid that fell over Russia in 2013. That asteroid was around 20 meters wide, by comparison, whereas the Chicxulub asteroid that killed off dinosaurs was around 1.5 kilometers in diameter.

Anyone with a small amateur telescope can watch WC9 fly by Earth this evening by pointing to pre-set coordinates, but nothing will be visible to the naked eye. The Northolt Branch Observatory in London livestreamed its view of the asteroid last night, but we’re still waiting to see if anyone will be streaming a live look at WC9 this evening. The asteroid will be closest to Earth at around 6:05PM Eastern time.