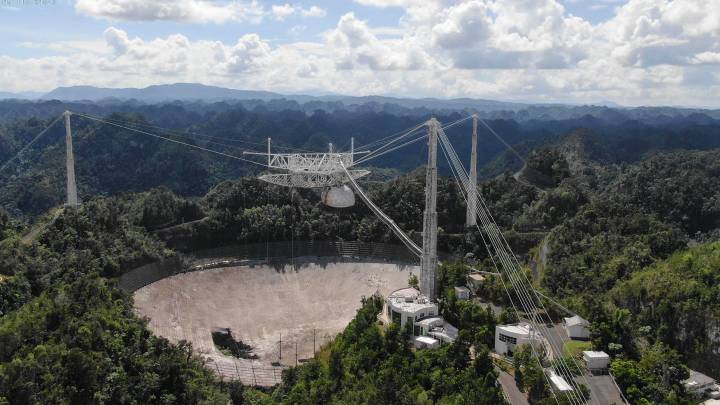 It was all the way back in August when a cable snapped at the decades-old Arecibo Observatory in Puerto Rico and slashed a massive gash in the radio dish. The telescope was obviously unable to do its job with just a huge wound, and scientists and engineers were struggling to decide exactly how to proceed.

According to a news release by the National Science Foundation, a new review of the damage and potential repair status of the Arecibo Observatory has resulted in the unfortunate decision that the telescope will be decommissioned and destroyed. The decision was made over concerns for the safety of staff and engineers at the facility and the danger that attempting to repair the telescope could pose to workers.

The release explains that while repair plans were being put into action, one of the other support cables snapped despite it being rated to hold well above the strain that it was dealing with. This, the group says, suggests that the other cables are not reliable, and repairing the facility would mean relying on cables that are likely to fail unpredictably.

The engineering teams had designed and were ready to implement emergency structural stabilization of the auxiliary cable system. While the observatory was arranging for delivery of two replacement auxiliary cables, as well as two temporary cables, a main cable broke on the same tower Nov. 6. Based on the stresses on the second broken cable — which should have been well within its ability to function without breaking — engineers concluded that the remaining cables are likely weaker than originally projected.

That’s a serious bummer. As one of the world’s largest radio telescopes, the Arecibo Observatory had been in service for the past 57 years and provided scientists with an unfathomable amount of data and observations from space. Now, that will all come to an end.

“NSF prioritizes the safety of workers, Arecibo Observatory’s staff and visitors, which makes this decision necessary, although unfortunate,” NSF Director Sethuraman Panchanathan said in a statement. “For nearly six decades, the Arecibo Observatory has served as a beacon for breakthrough science and what a partnership with a community can look like. While this is a profound change, we will be looking for ways to assist the scientific community and maintain that strong relationship with the people of Puerto Rico.”