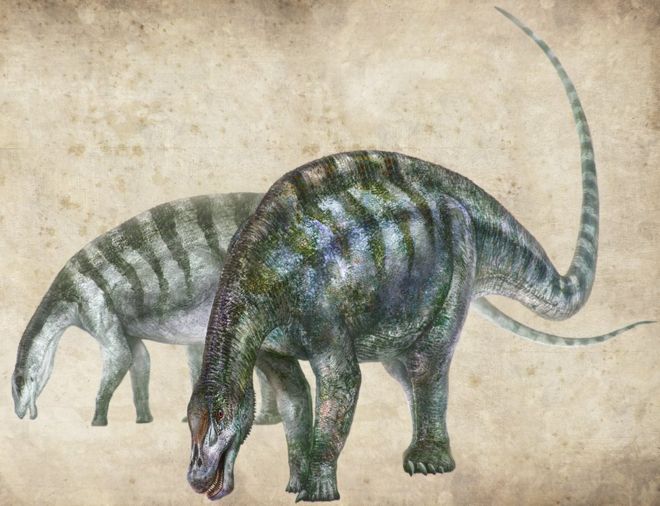 Ferocious carnivores like the Tyrannosaurus tend to take top billing when it comes to dinosaur pop culture, but the colossal plant-eaters known as sauropods are just as worthy of acclaim. This group of long-necked beasts include the brachiosaurus, brontosaurus, apatosaurus, and diplodocus as well as many others, and paleontologists in China are now ready to add another new species to the list.

The creature’s long-still bones were discovered in a handful of different fossil sites in China, and with as many as 10 partial skeletons to draw from, researchers have been able to classify it as a new species. It has been named Lingwulong shenqui, which roughly translates to “the amazing dragon of Lingwu.”

The dinosaur wasn’t quite as large as others in the sauropod group, but it still would have been an impressive creature to see in person. It is thought to have measured between 35 and 55 feet in length, and like most sauropods it would have spent the majority of its days traveling in small groups and munching on vegetation.

But what’s so special about this particular dinosaur to warrant the “amazing” tag? Well, that part is still up for debate. The dinosaur is thought to be unique in that it is the first member of its evolutionary family (Diplodocoidea) to be discovered in East Asia.

“The new discovery challenges conventional biogeographical ideas, and suggests that dispersal into East Asia occurred much earlier than expected,” the researchers write. “Moreover, the age of this new taxon indicates that many advanced sauropod lineages originated at least 15 million years earlier than previously realised, achieving a global distribution while Pangaea was still a coherent landmass.”

Classifying animals that have been dead for 174 million years is a tricky thing. Just where this species sits on the family tree is still being discussed, but if it is indeed a member of the diplodocoid family, it could seriously shake up how paleontologists understand the spread of these types of dinosaurs back when the Earth had one massive landmass rather than separate continents.