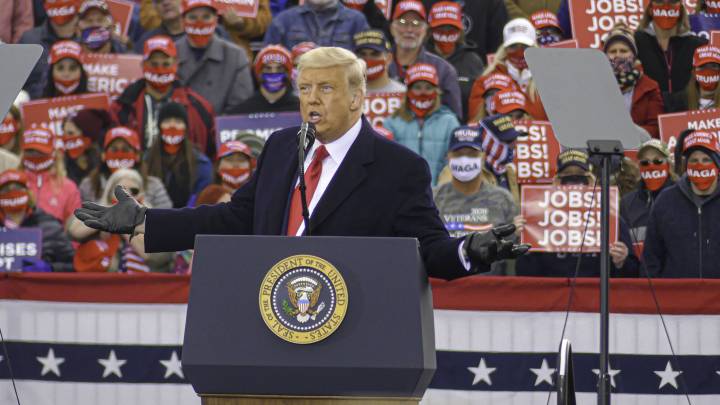 It’s 1 am on the East Coast as I type this words, which means Election Day 2020 has come and gone, and as expected this thing is going to come down to the wire — meaning, the number-crunchers who make the projections at news outlets still need a bit longer before they can tell us definitively who won the election.

Former Vice President Joe Biden has just delivered some impromptu remarks to supporters late Tuesday night, urging them to “keep the faith” and declaring, “I’m here to tell you tonight, we believe we’re on track to win this election.” That’s even though The Associated Press has already called Florida and Ohio for Trump — big wins for the president, though the race in a number of other battleground states is still too close to call. Meaning, among other things, this election might not even be officially called until Wednesday evening at the earliest, if then, based on some of the latest projections I’ve seen. I’m loathe to include the official Electoral College tally at this particular moment in time, since things could change very quickly, but for posterity’s sake here’s where we are at about 1:15 am early Wednesday morning, post-Election Day: In the race to 270 electoral votes, Biden as of this moment has 223, while President Trump has picked up 174. So, yeah, still a bit more to go — while, at the same time, I think it’s worth pointing out that not enough people have been talking about one particularly important fact about the president that it’s worth reiterating, no matter who wins.

Joe Biden: "I'm here to tell you tonight we believe we're on track to win this election." pic.twitter.com/2FV7NUpDy7

Biden certainly still has a decent shot of pulling this out. FiveThirtyEight editor-in-chief Nate Silver tweeted to his 3.5 million followers early Wednesday morning that: “With things starting to look better again for Biden in a probabilistic sense, but a lot of uncertainties and several states unlikely to be called for a while, the Fox News call in Arizona looms pretty large as a check against claims Trump might make that he’s winning.”

So, let’s go with that for a moment. Let’s say the remaining electoral chips fall just right, in Biden’s favor, and he ends up being declared the 46th president of the United States. Even in that scenario, don’t forget:

We will still have some two-and-a-half months of Trump left before he leaves office in January.

Said a different way, in that scenario America will have rejected the leadership of the man who will still be at the helm during the absolute worst point of the coronavirus pandemic yet — you know, that once-in-a-century health crisis that might end up costing him his re-election.

As The New York Times laid out here, even with a Biden win the nation would still have to get through the coming nadir of the COVID-19 pandemic, with infections approaching 100,000 per day and death counts on the rise — leading to fears of overwhelmed hospitals. All with a few months to go of a lame duck President Trump.

“The president has largely shuttered the White House Coronavirus Task Force and doubled down on anti-science language, telling voters that the country is ’rounding the corner’ in the fight against the virus that has claimed nearly a quarter of a million lives,” the Times reported.

Additionally, Trump at this point is reportedly all but ignoring his health secretary, Alex Azar, as well as agency heads like CDC director Dr. Robert Redfield and FDA commissioner Dr. Stephen Hahn, in favor of elevating the insights from Dr. Scott Atlas, who’s a late addition to the president’s team of health advisors. Atlas, whose specialty is neuroradiology as opposed to infectious diseases like Dr. Anthony Fauci, has raised eyebrows for things like his dismissal of mask-wearing as a coronavirus-fighting strategy.

Oh, and about Dr. Fauci, don’t forget — Trump has dropped hints that he may fire him after the election.