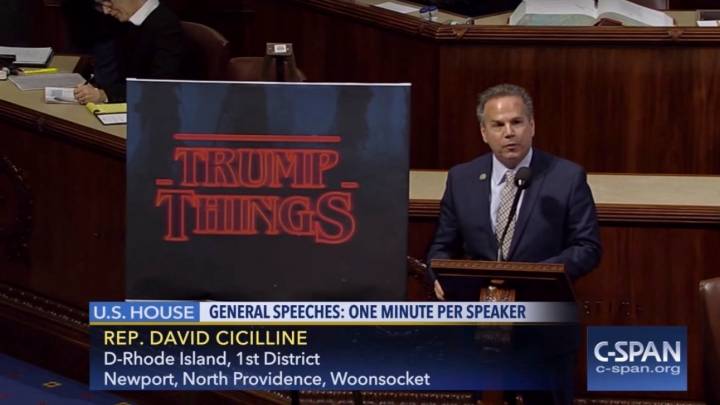 It’s been a tough week for Trump’s camp, and the president’s solo press conference on Thursday did not help. According to Trump, the dishonest media is still unfair, and anything having to do with Russia is fake news — that’s on top of all the reports that criticize Trump, which are also fake news. You know things have gotten bad for Trump when even Fox News criticizes his remarks.

But the most intriguing anti-Trump opinion this week came from an elected official, Congressman David Cicilline (D-RI), who took the House floor on Thursday to liken Trump’s administration to Netflix’s SAG-winning show Stranger Things.

Either Cicilline truly loves the show, or this was a brilliantly mastered PR stunt. Either way, the congressman deserves credit where credit is due, having come up with an amazing way to voice his concerns about Trump. He even had a poster that read Trump Things next to him.

“Mr. Speaker, like the main characters in Stranger Things, we are now stuck in the Upside Down,” the congressman said. He then referred to all the questionable Trump decisions we’ve witnessed in his first month as president, including Russia, the Muslim-ban and the wall, to name just a few of the most tumultuous issues.

“Mornings might be for coffee and contemplation, but Chief Jim Hopper is not coming to rescue us,” Cicilline said. “Like Mike, Lucas, Dustin, and Eleven, we must remain focused on the task at hand and hold this administration accountable, so we can escape from our own version of the Upside Down.”

As for the congressman’s interest in the popular Netflix show, he told io9 via Twitter that he “can’t wait for season two.”