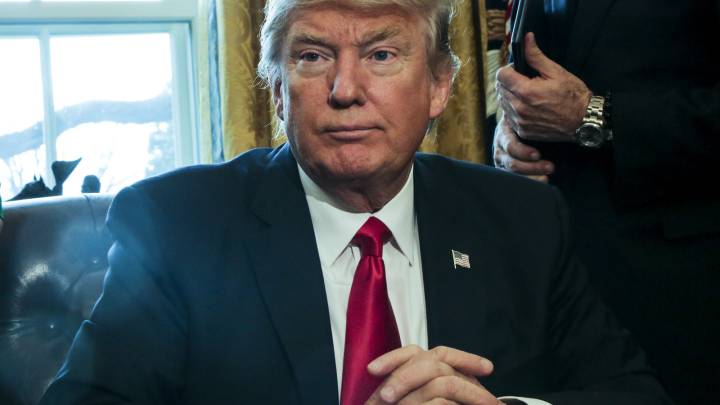 Donald Trump, a born winner of wins according to him, was dealt a major blow in court on Thursday, as a three-judge panel of the United States Court of Appeals for the Ninth Circuit voted unanimously to uphold a ban on the President’s controversial Muslim ban.

Even though private citizen Trump is used to duking it out in courts with his opponents, having been involved in around 3,500 lawsuits before he took office, this is his major legal defeat as president. And you know Trump is angry when you “hear” him yelling on Twitter.

Online, nobody can hear you scream, but that’s exactly what writing in all-caps signifies if you know your cyber.

“SEE YOU IN COURT, THE SECURITY OF OUR NATION IS AT STAKE!,” he said on Twitter. Yes, that’s a threat that he’s going to appeal the verdict, and he seems rather angry.

Interestingly, he did not retweet the threat on the official @POTUS twitter account, even if his threat comes from Trump, the president. Trump probably uses the official White House Twitter account to retweet things that matter to the nation, like Nordstrom’s “unfair” treatment of a certain Ivanka Trump.

Also, if you’re worried about snow storm Niko, you should know that it’s probably nothing. Trump hasn’t tweeted anything about it from either his personal or presidential account, which means Niko is not going to put your security “at stake.” On the other hand, bad weather did ground several flights, which can only mean that “bad dudes” will have to wait to enter the country.

The court thoroughly explained why it chose to side against Trump’s so-called Muslim ban, and The New York Times has a great coverage of the verdict. Not only is the immigration ban blocked for the time being, but states can continue to sue the administration. And from the sound of it, Trump still has to prove the need and urgency of such a ban and implement measures that would not hinder travel plans for visa and green card holders.

The Washington Post explains how the entire process of issuing an executive order works, and how the Trump administrations cut corners and made unusual choices that only transformed the immigration ban into the nightmare that it turned out to be, both for travelers and for Homeland Security personnel trying to enforce it.