Good news: Tens of millions of Americans are getting a pretty sweet bonus year, the strained economy and ongoing coronavirus pandemic notwithstanding. It’s just that, well, the bonus isn’t coming from your employer — at least, not the bonus we’re referring to. No, this one is the sum total of all the stimulus money that the federal government is parceling out through the end of this year. Encompassing things like stimulus checks, and at least two tax credits (the earned income tax credit and the expanded federal child tax credit).

It’s all part of a somewhat frantic effort by government leaders to keep too many Americans from tipping over the financial edge. And it also doesn’t even account for everything the government is trying to do in this regard. Such as the new, more targeted eviction moratorium the CDC announced this week. The thinking here is that too many Americans evicted from their homes could have a detrimental impact on public health and exacerbate the pandemic.

As you might expect, meanwhile, middle-class and lower-income Americans will benefit the most this year from the distribution of stimulus money.

Take a look at the graphic below, from The Motley Fool financial website, to get a sense of things in their totality. As you can see, there’s a huge drop-off in stimulus money available to people who make more than $247,400. While the most money is available to Americans in the bottom income tiers. That total is $3,590, for people at the lowest point of the income scale. 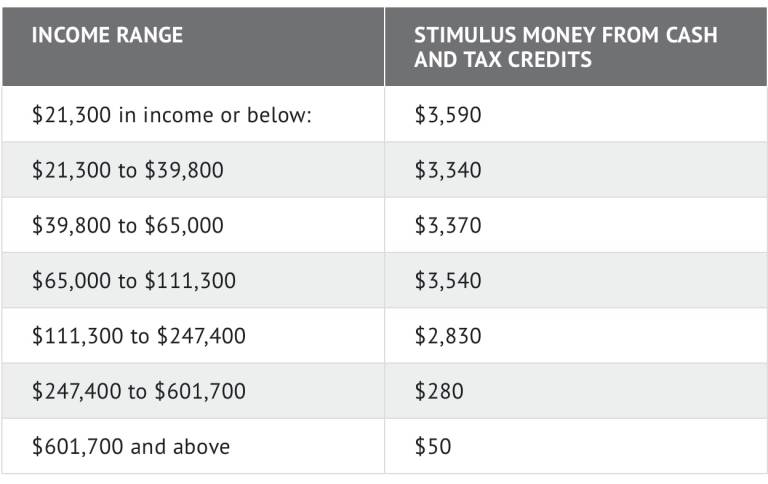 The one stimulus check from the federal government this year accounts for most of this stimulus money. It’s generally for $1,400. And while millions of Americans already got that money, some of those checks are still trickling out.

On July 21, the IRS announced that more than 171 million of these payments have been distributed since March 12. They represent a total value of more than $400 billion in stimulus money for Americans.

Regarding tax credits, the big benefit here is the temporarily expanded federal child tax credit. Depending on whether a family has one or more eligible children (and meets income requirements) the credit will be paid out thus.

Families will get half of the full amount next year, as a normal tax credit. The other half is being in advance, this year. And not all at once, either. This half spans six stimulus checks that are being paid monthly, through December 15. The first check came on July 15. And the next one is coming up one week from Friday — on August 13, to be exact. Read more from the IRS here, as well as in our previous coverage.

Again, as we noted above, these details concern benefits at the federal level. Individual states are also doing their own thing on top of all this stimulus money. Millions of Californians, for example, are getting a $600 stimulus check next month. The $1.9 trillion stimulus law from March also steered billions of dollars to states to use for rental assistance.

The National Low Income Housing Coalition maintains a list of a few hundred rental assistance programs around the country that can help get a chunk of the federal stimulus money to people who need it. Generally, you have to be a renter who’s having a hard time paying your rent and/or your utility bills because of the pandemic.

Check the list at that link above for a rental assistance program in your area. In Illinois, tenants and landlords there can apply for grants of up to $25,000 to cover as many as 15 months of rent payments between June of last year through this month.