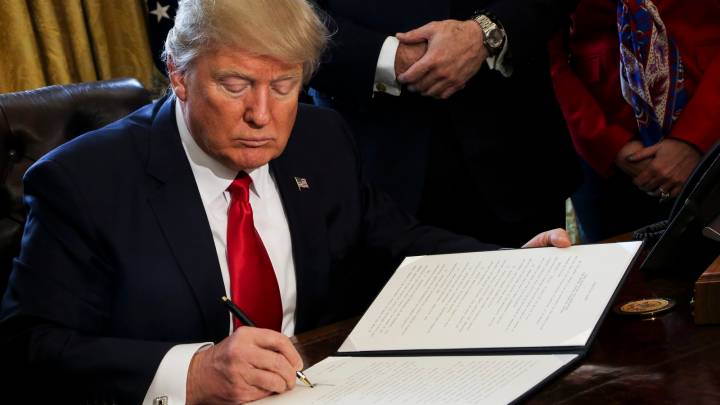 Democrats and Republicans in Congress finally set aside their differences to help struggling Americans by passing a $900 billion stimulus package this week which included enhanced unemployment insurance, additional funding for the Paycheck Protection Program, an extension of the eviction moratorium, and a new round of $600 stimulus checks. All that was left was for President Donald Trump to sign the bill into law, but on Tuesday night, he surprised everyone by sharing a 4-minute video on Twitter lambasting the package and demanding $2,000 checks.

Neither party could have seen this coming, but Democrats were quick to agree that the $600 payments weren’t going to cut it. Shortly after the video was posted, House Speaker Nancy Pelosi took to Twitter to claim that “Democrats are ready to bring this to the Floor this week by unanimous consent,” referring to $2,000 checks. Providing Trump doesn’t change his mind and sign the bill today, Republicans are going to have to be faced with a difficult choice: Openly defy the president by voting against the bigger checks, or side with the Democrats?

Nancy Pelosi didn’t specify when the measure for $2,000 direct payments would be brought to the floor, but a senior Democratic aide tells CNBC that House Democrats will seek to pass the bill by unanimous consent on Thursday. The House will be in a pro forma session when the vote happens, and just one representative could prevent the measure from passing. Even if it were to make it through the House, the Republicans in the Senate have made it abundantly clear that they don’t want to spend a penny more than was already included in the stimulus package.

“We spent months trying to secure $2000 checks but Republicans blocked it,” said Senator Chuck Schumer. “Trump needs to sign the bill to help people and keep the government open and we’re glad to pass more aid Americans need. Maybe Trump can finally make himself useful and get Republicans not to block it again.”

In addition to criticizing the meager direct payments, Trump also railed against the 5,593-page spending and stimulus bill as a whole, saying that it “has almost nothing to do with COVID.”

Of course, the $2.3 billion Consolidated Appropriations Act combines the spending bill to keep the government funded with the stimulus package, and many of the provisions he attacked are in the spending bill. As CNBC contributor Tony Fratto notes, the $40 million budget for the Kennedy Center is not only part of said spending bill, it’s also “EXACTLY the amount he asked Congress to appropriate in his 2021 Budget request.”

There are a number of potential crises that could manifest from Trump refusing to sign the bill, from the government shutting down on December 28th to essential unemployment programs expiring for 12 million Americans the day after Christmas. The eviction moratorium would lapse as well, leaving millions of Americans at risk of losing their homes at the end of the month if they are unable pay the back rent they’ve accumulated during the pandemic.