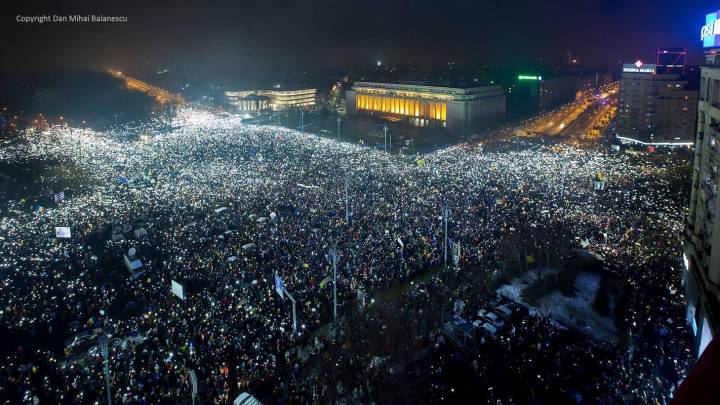 The week-long anti-corruption protests in Romania culminated on Sunday with a huge gathering of people in the country’s capital and surrounding major cities. A record number of people took to the streets to display their discontent with an executive order issued last Tuesday that would have made it easier for many top politicians to dodge criminal investigations and even avoid prison time.

The order was issued in the middle of the night on January 31st and then rescinded Sunday afternoon. The general public won the fight, yet protesters still gathered in the streets to convey their in distrust in the new government. As darkness set in, the crowd of some 250,000 people in front of the government building in Bucharest lit up their smartphones, with videos and photos of the event going viral.

As many as 600,000 may have taken to the streets on Sunday evening in Romania, including the quarter million in Bucharest, in the sixth straight day of protests against the executive order. Trump shouldn’t be worried, though, because his inauguration crowd was still bigger.

Similar demonstrations took place throughout the month of January when the government was rumored to be planning the emergency ordinance.

The now-rescinded ordinance would have made it possible for the leader of the Social Democratic Party (PSD), Liviu Dragnea, to escape a possible prison sentence. Dragnea was recently given a two-year suspended sentence in an electoral fraud case, which made him ineligible to be prime minister. A second conviction would mean prison time for the leader.

The emergency ordinance would have decriminalized some forms of abuse of power and corruption, if the amount involved was less than $48,000, as is the case for Dragnea’s upcoming trial. A new law proposed by the government last week would also pardon convicts serving less than five years for certain crimes.

Dragnea is the most prominent member of the PSD party who may have benefited from the ordinance and the related laws. The measures will now have to pass through parliament, which is largely controlled by the same party. PSD won the mid-December election on populist promises and returned to power after a former PSD government official was forced to resign by similar street protests a year earlier, in the winter of 2015.

The Romanian demonstrations are the biggest since the 1989 revolution. Unlike the bloody protests that threw out communism in 1989, the 2017 protestors are demonstrating peacefully across the country. The 250,000 smartphones lighting up the night in Bucharest may be just a symbolic message to the new government, but protesters seem determined to continue their fight to protect democracy in a country that’s been riddled with corruption since the ’89 revolution.