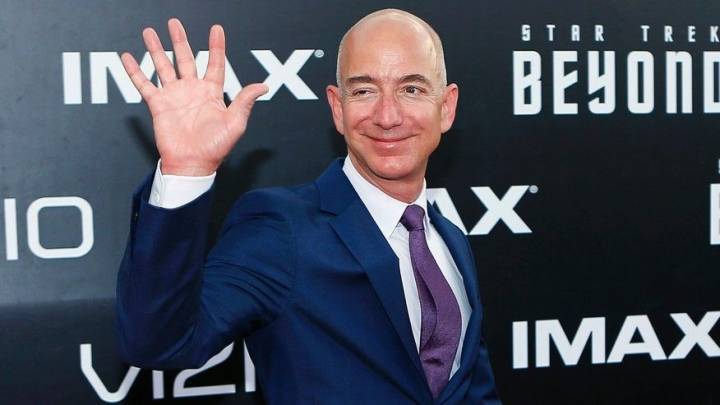 In the latest clash between President Donald Trump and Jeff Bezos, Trump accused the Bezos-led Amazon of not paying taxes.

“The #AmazonWashingtonPost, sometimes referred to as the guardian of Amazon not paying Internet taxes (which they should) is FAKE NEWS!,” the president penned on Twitter.

Amazon technically does not own The Washington Post. Bezos himself purchased the newspaper in 2013 for a reported $250 million.

While it’s unclear what “Internet tax” the president is referring to, Amazon does indeed collect sales taxes on items it sells on its platform.

It’s unclear what prompted the latest attack by Trump, but it may stem from a recent report by The Washington Post surrounding Trump and fake Time magazine covers hanging in his various properties.

The newspaper found that a number of Time magazine covers in several of his golf clubs were deemed fake, including one from March 1, 2009. On this particular cover, it says “Donald Trump: The ‘Apprentice’ is a television smash!” There is also a second headline, which reads: “TRUMP IS HITTING ON ALL FRONTS . . . EVEN TV!”

A Time spokesperson confirmed to The Post the covers are fake and has asked The Trump Organization to remove them.

The shot at the tech giant, which is now valued at $450 billion and has made Bezos one of the wealthiest men in the world, comes after the White House hosted “tech week” to discuss several areas in which the federal government can improve efficiencies and help tech companies with regulations.

As part of the discussions, the White House said it needs to update its technology and shift some of its data to the cloud, which could be a huge boost to Amazon and its valuable Amazon Web Services unit, the backbone of many businesses.

This is not the first time Trump has gone after Bezos, Amazon and The Washington Post, a paper he has derided constantly on social media.

In 2016, Trump said that Amazon actually controlled the Washington Post and accused it of having an unlevel playing field and not paying taxes.

“… Amazon, which, through its ownership, controls the Washington Post, should be paying massive taxes — but it’s not paying, and it’s a very unfair playing field and you see what that’s happening and what that’s doing to department stores all over the country,” Trump said. “Very, very unfair. And you’re talking about billions and billions of dollars. They should be paying those taxes.”

He also made several other comments about Amazon on the campaign trail, noting Bezos and Amazon have an antitrust problem because of the size and scale of the company.

Amazon has not yet responded to a request for comment on this article from Fox News.