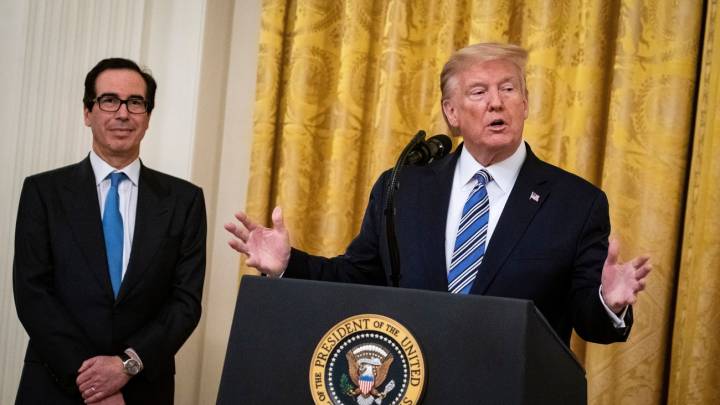 A Scripps TV news reporter on Monday managed to get President Trump to answer the question that’s been on everyone’s mind for a few weeks now, as the coronavirus pandemic has continued to rage and continues to wreck the country’s jobs picture, even as new cases of the virus continue to spike around the US. It’s the big coronavirus stimulus question — are we getting new checks anytime soon?

You can watch video below of Trump answering this, but bottom line, the president seems committed to supporting another round of “generous” stimulus checks in his response. His administration had already sent signals that this was a likely outcome, and at a time when multiple stimulus proposals have been floated by lawmakers that range from even bigger stimulus checks than we got the first time around to creative ideas like paying people to travel and visit restaurants to get the economy cranking back up again. So, is this cause for celebration? Let’s dig a little deeper into the president’s answer to find out.

First, take a look at this video of the president answering the question about additional stimulus checks on Monday so you can get a sense of his language yourself:

VIDEO: President Trump commits to 2nd stimulus. He says details would be announced in the coming weeks. The President would not tell me how much of a check Americans will receive. pic.twitter.com/Abd5E8P3Au

I was very deliberate in saying that it “seemed” like the president is committing to additional stimulus checks in his answer here. That’s what he’s referring to, in all likelihood, but … well, here as is the case oftentimes with the president, his answers and the questions that precede them don’t always fit together like a dovetail joint.

The reporter introduces his question by talking about people still struggling, for example, and who’ve spent all the first stimulus check they received. The president goes on to confirm the following: “We will be doing another stimulus package. It’ll be very good, it’ll be very generous.”

Stimulus package, is what he said right there, not check. Which could be a cagey way of talking about a new stimulus something-or-other that might be coming, even if it’s not a direct payment to Americans. Forbes even published a post on Monday along this exact line, with the headline declaring that “No, Trump Didn’t Say There Would Be Second Stimulus Checks.”

Except … he actually did.

Here’s the exact language of the question that was asked in the video above: “I have a lot of viewers in Florida, Ohio, Wisconsin, Michigan, who are still struggling economically, sir. They spent all of that first stimulus check, are you going to get them a second stimulus check?

That’s a pretty straightforward response, it would seem. But, again, the president did leave himself some “outs” elsewhere in this exchange. Such as when he’s asked when the details of whatever this is will be announced. Here’s how Trump responds: “I think over the next, I think it’s going to be bi-partisan, I think it’s going to be over the next couple of weeks, probably.” I read that as — the ball’s in Congress’ court, and if something doesn’t happen, it’s on them.

Take it all with a grain of salt, but it seems reasonably likely that more stimulus checks are coming, and that they’ll be part of an overall “generous” new stimulus package passed by Congress, that we’ll know more about in a matter of weeks. Like the president is fond of saying, “We’ll see what happens.”