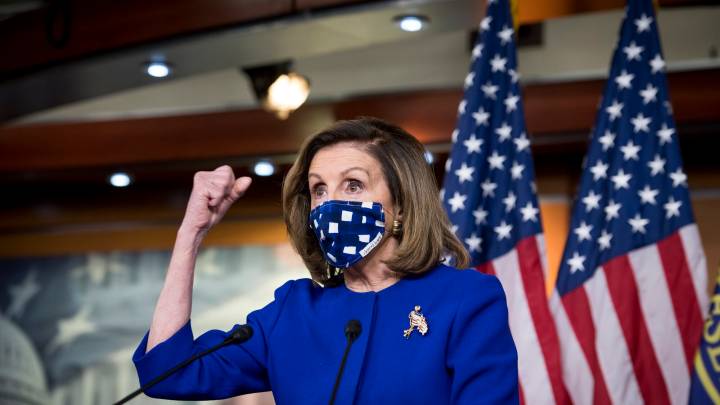 For the past several months, progress towards the passage by Congress of a new coronavirus relief accord that includes funding for new $1,200 stimulus checks has felt a little like the way Lucy always treated Charlie Brown when he was trying to kick that football. We would hear about progress, things would be looking good, and then hopes would abruptly get dashed. Either the Democrats, in the form of primary negotiator House Speaker Nancy Pelosi, or any number of high-level GOP officials would balk and accuse the other side of asking for too much. And then, the same way Lucy always yanked away from that football at the last second, all of us would be Charlie Brown, lying flat on our backs and wondering how we could have fallen for this yet again, for the millionth time.

In recent weeks, meanwhile, there has been an uptick in the pressure on both sides to get a deal done — especially with just days to go before Election Day 2020. Here’s Pelosi, for example, struggling to explain her position in a coherent way on CNN in front of a generally Democrat-friendly inquisitor. Trump himself earlier this month blew up the stimulus talks in frustration, then he tweeted merely a few days later that Republicans should go for a huge deal — the same thing Pelosi wants. Now, here we are, at the start of the final full week before the November election. Where do things stand?

For her part, Pelosi thinks a deal could come as soon as this week if all the cards fall into place (which, let’s be honest, is something that has almost never occurred during this whole months-long process). She said during an appearance on CNN’s State of the Union program on Sunday that she’s waiting to get a “final yes” from the White House as soon as today on her stimulus deal demands.

House Speaker Pelosi on a new stimulus bill: “To do anything, though, that does not crush the virus is really official malfeasance and to crush the virus we just have to follow the science: Testing, tracing, treatment, mask wearing, ventilation, separation, and the rest” #CNNSOTU pic.twitter.com/3CiZj25dPN

“I sent over on Friday the list of concerns we still had … and my understanding (is that) he will be reviewing that over the weekend and we will have some answers on Monday,” Pelosi said, referring to Treasury Secretary Steve Mnuchin.

She went on to tease the prospect of Democrats ramming through a coronavirus bill before 2021 if things go in the Democrats’ favor next week — that is, if the party wins the Senate in addition to the White House, as well as keeping control of the House of Representatives.

“The sooner the better — people need help right away,” Pelosi said, regarding a stimulus bill as well as the prospect of a new round of $1,200 checks.

Of course, they could get that help “now” if Democrats quit blocking the Republicans’ move to pass more targeted legislation, rather than favoring Pelosi’s kitchen-sink approach to a bill. White House chief of staff Mark Meadows appeared on the CNN program before Pelosi, insisting that Pelosi has consistently moved “the goalposts” on a stimulus deal for lo these many months: “We’re up to $1.9 trillion,” Meadows said. “I do have a commitment from (Republican Senate) Leader McConnell that if we get an agreement, he is willing to bring it the to floor and get it passed.”