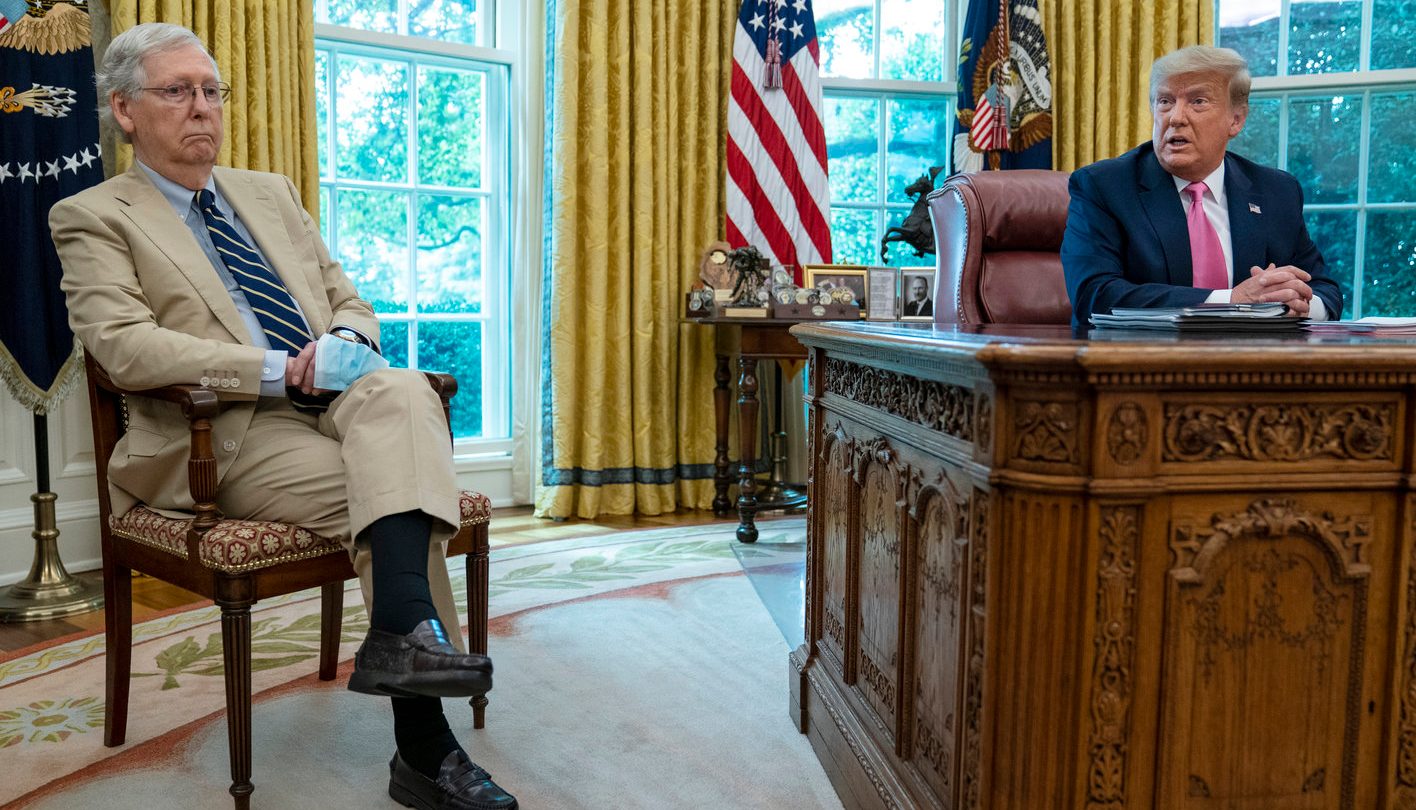 A reporter asked Kentucky Republican and Senate Majority Leader Mitch McConnell whether he thinks the Senate will pass a new coronavirus stimulus bill by the end of next week. Before we tell you what his reaction was, know that the timing inherent in the question was not picked at random. Not only is a new stimulus bill expected to offer much-needed emergency benefits like the possibility of another wave of stimulus checks, desperately needed by millions of Americans thrown out of work amid the coronavirus pandemic — but the end of next week, July 31, also represents a key deadline. That’s when an extra $600/week in unemployment benefits that was funded by the stimulus bill Congress passed back in March is statutorily set to expire. So, having said all that, what was McConnell’s reaction to the question about wrapping up a coronavirus stimulus package by the end of next week?

According to NBC News, in response to the question about whether the Senate can get the legislative ball over the finish line that soon, McConnell laughed and merely replied, “No.”

What this portends is that in the days to come, as the plodding machinery of the federal lawmaking apparatus creaks to life in service of trying to do something and pass, well, anything, we’re likely going to get a front-row seat to observe what Washington DC does best: Something in-between dithering and doing nothing much at all.

To recap, the Trump administration wants a payroll tax to be part of a new stimulus bill. That would be tantamount to a more than 7% pay hike for many workers. But key Republican leaders, at least for now, aren’t on board with that idea.

Trump officials are also pushing for a reduction in funding for coronavirus testing, which even Republican leaders in the Senate acknowledge isn’t exactly a good look right now, with coronavirus cases and deaths continuing to climb in the US. The whole process is so apparently haphazard at the moment that Texas Republican Sen. Ted Cruz, exasperated, reportedly exclaimed at a meeting of top Republican officials Tuesday: “What the hell are we doing?”

And as if all that wasn’t worrisome enough, Republicans don’t even have their priorities solidified enough yet to start talking to Democrats to hammer something final out.

After Republicans met Tuesday, McConnell told reporters, “I’m going to introduce a bill in the next few days that is a starting place that enjoys fairly significant support among Republican senators, probably not everyone.” He thinks the party can still negotiate, for example, over things like the $600/week unemployment insurance bump that many Republican lawmakers oppose.