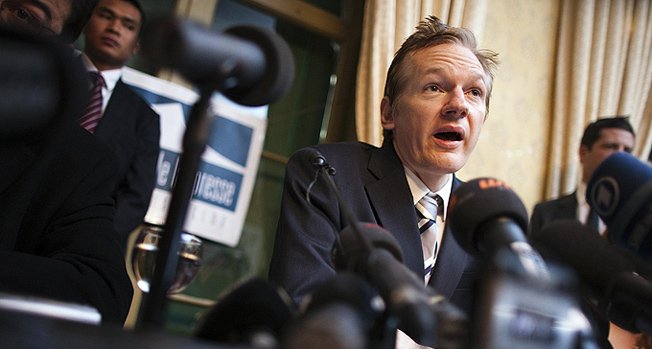 US authorities are taking steps to formally file charges against and arrest Wikileaks founder Julian Assange, according to a new report from CNN. For the past few years, Assange has been residing inside of the Ecuadorian embassy in London. That, however, hasn’t stopped Assange and Wikileaks from leaking a wide array of confidential documents from a number of sources, including information regarding the CIA’s hacking tools and private emails sourced from Democratic National Committee members.

Assange’s role as the founder of Wikileaks has been controversial to say the least. Still, Assange supporters espouse the position that Assange’s actions are protected by the First Amendment. A contrary position holds that Assange, far from being a messenger relaying information, actually played a hand in soliciting and obtaining the sensitive information he became famous for trafficking. More recently, Wikileaks was accused of being a proxy used by Russian intelligence agencies in order to impact the 2016 U.S. Presidential election.

The US view of WikiLeaks and Assange began to change after investigators found what they believe was proof that WikiLeaks played an active role in helping Edward Snowden, a former NSA analyst, disclose a massive cache of classified documents.

Speaking on the matter, Attorney General Jeff Sessions relayed the following at a news conference on Thursday.

This is a matter that’s gone beyond anything I’m aware of. We have professionals that have been in the security business of the United States for many years that are shocked by the number of leaks and some of them are quite serious. So yes, it is a priority. We’ve already begun to step up our efforts and whenever a case can be made, we will seek to put some people in jail.

Just a few days ago, CIA Director Mike Pomeo spoke disparagingly of Wikileaks, articulating that it carries itself like a “non-state, hostile intelligence service” that has no regard for the damage it may cause to national security.

Assange’s lawyer Barry Pollack, meanwhile, claims that he hasn’t heard any information on the matter from the Department of Justice while affirming that Wikileaks’ actions in leaking information is akin to what publications and news organizations like The New York Times routinely do.

Incidentally, Assange previously promised to turn himself in to US authorities if Chelsea Manning was pardoned. As it turns out former President Obama did, in fact, pardon Manning this past January.

If Obama grants Manning clemency Assange will agree to US extradition despite clear unconstitutionality of DoJ case https://t.co/MZU30SlfGK