By the time we get to the end of this year, the federal government will have sent millions of Americans a bonus, of sorts, this year that totals almost $3,500. That’s according to a new stimulus update from the Institute on Taxation and Economic Policy, which has calculated that a mix of new stimulus checks and tax credits is having a big impact. To the tune, in fact, of an average of $3,450 for Americans making $65,000 or less annually.

These figures focus on the third stimulus checks that millions of Americans have already started to receive. As well as the expansion of two tax credits — the child tax credit, as well as the earned income tax credit. They stem from the stimulus legislation that President Biden signed in March. But, remember, that bill was also chock-a-block with other benefits for Americans, including an increased health care subsidy and an extra $300/week to help jobless workers.

Before taking a closer look at these benefits, let’s also remember what else that the federal government, as well as state officials, are doing in response to the economic pain of the coronavirus pandemic. More than one emergency coronavirus relief bill passed by Congress, as we noted yesterday, also included billions in stimulus rental assistance. Unfortunately, though, there’s evidence that enough Americans still don’t seem to be aware of that fact.

Another expanded tax credit is the Child and Dependent Care Credit. It can net taxpayers up to 50% of up to $8,000 of child care and similar costs for a child under 13, a spouse or parent who can’t care for themselves, or another dependent. And up to $16,000 of expenses for two or more dependents.

That brings us to where things stand with the institute’s assessment of what millions of the neediest Americans can get from some of the other myriad stimulus benefits available.

The following data from the institute, via CNBC, shows how much Americans at a variety of income levels can earn from the new stimulus benefits: 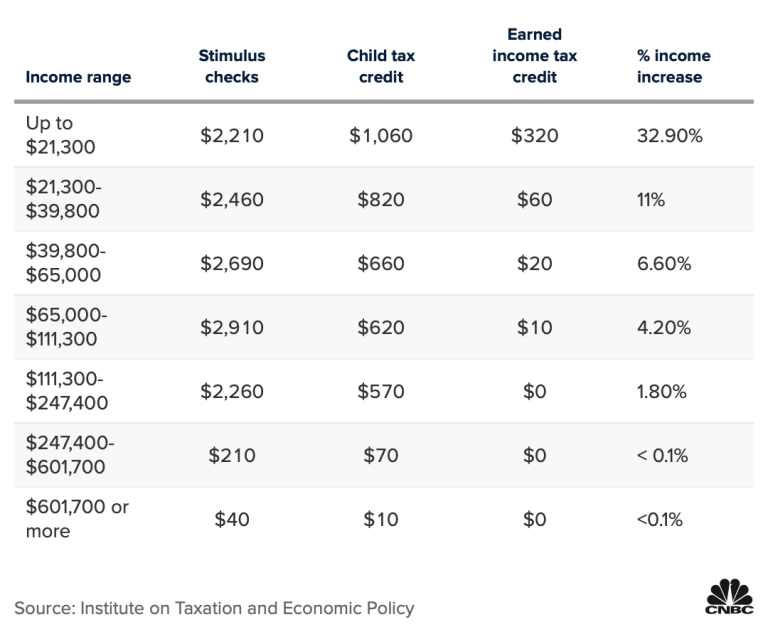 Earlier this month, the IRS started distributing the first of six expanded federal child tax credit payments. Normally, that credit maxes out at $2,000. Because of the pandemic, that amount got bumped up to $3,600. The credit is also structured so that recipients get half of it starting now and half next year.

Other details to keep in mind as part of this new stimulus update:

Regarding the half of that tax credit you can get now, families with children under age 6 are getting monthly checks for up to $300 for each eligible child. Between ages 6 and 17, the amount is $250 for each child. These six checks will add up to half of the family’s approved child tax credit payment. The other half is coming next year as a normal tax credit.