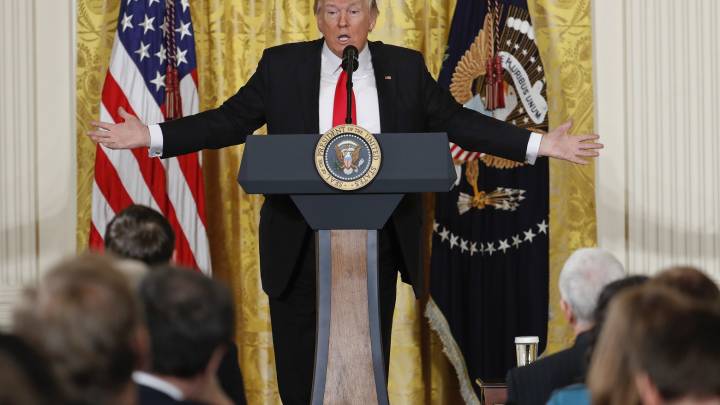 You’re going to want to sit down before you watch this.

What started as a relatively innocuous announcement from President Trump that Alexander Acosta would be the new nominee for the labor secretary following Andrew Puzder decision to withdraw his nomination turned into a knock-down-drag-out brawl with the press. If you expected Trump to ignore the countless damning reports regarding his and his staff’s connections to Russia, I have some bad news for you: he didn’t.

Before taking any questions, Trump rattled off a series of untruthful (and often nonsensical) statements, claiming that his electoral college victory was the largest since Ronald Reagan’s (it wasn’t), that the current administration is running like a “fine-tuned machine” (it’s not) and that decisions from the 9th Circuit court which continued a stay on his travel ban “are overturned 80% of the time” (they aren’t).

Things only got stranger from there, as Trump opened the floor for questions.

When asked about General Michael Flynn’s recent resignation/firing, Trump reinforced press secretary Sean Spicer’s earlier statements — that Flynn had not done anything illegal, but rather that Trump was simply uncomfortable with “the way that information was given” to Vice President Mike Pence by Flynn. He then proceeded to repeatedly call the Russia story “fake news,” and things began to go off the rails.

As for the recent leaks relating to Russia, Trump said that the leaks are real, but that “the news is fake.” When a reporter fact-checked him on his claim about his electoral college victory, Trump said, “I don’t know, I was given that information.” Trump tried to explain uranium, talked at length about his debates with Hillary Clinton and affected a silly voice while gifting us with this incredible quote:

It was the first of two times he would create a headline on the spot, the second in reference to his attempts to forge a positive relationship with Russia. I genuinely can’t explain how weird this is, so watch it yourself: