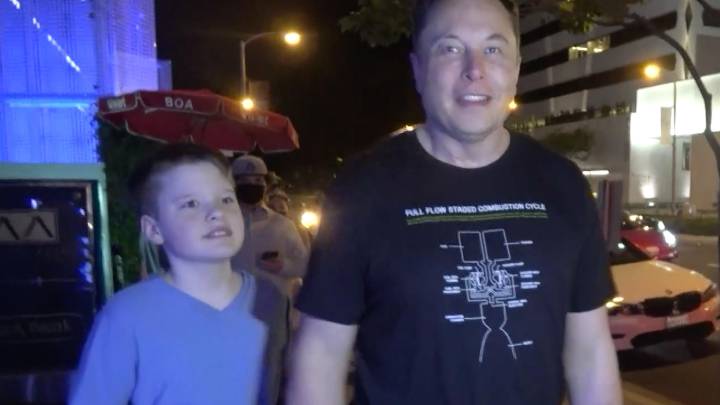 It’s hard to see how anyone on Planet Earth could credibly claim to be undecided about Donald Trump at this point, but that’s apparently where Tesla CEO Elon Musk is right now. That’s what he admits to publicly, at any rate.

Musk was asked at one point during Monday’s episode of Sway (a podcast hosted by New York Times opinion writer Kara Swisher) if he would acknowledge who has his vote come November. In response to being questioned about whether he likes Trump and plans to vote for him, the brash billionaire sounded like — even despite the president’s handling of the coronavirus pandemic — he still might be on Team Trump, saying he thinks that he’ll vote to re-elect the president. Musk‘s reply: “Um …. I, I mean, I’m … to be totally frank, I’m not … I mean, I think … let’s just see how the debates go. You know?

Swisher: That’s going to be your thing, the debates?

Musk: Well, I think that’s probably the thing that will decide things for America.

Musk: I think people just want to see … see … see if Biden’s got it together.

Swisher: And if he does?

Musk: If he does he probably wins.

It’s certainly an unconventional take on Trump’s re-election chances, with the president down in most major polling right now and the assumption that especially because of Trump’s disastrous handling of the response to the COVID-19 virus outbreak that this is Biden’s election to lose.

Swisher and Musk went on to have a substantive conversation about everything from where Trump and Musk agree and disagree, as well as Musk’s personal political views (“Socially very liberal and then economically right of center. Maybe. Or center? I don’t know … Obviously I’m not a communist.”

Trump, along with Vice President Mike Pence, recently attended the joint SpaceX and NASA astronaut launch, and Musk also sounded very Trumpian during a recent discussion of California’s stay-at-home orders and business closure mandates connected to the coronavirus. Musk actually took some time during a recent Tesla earnings call to go on the following rant, as we noted here:

“The extension of the shelter-in-place or, frankly, I would call it forcibly imprisoning people in their homes against all their constitutional rights — my opinion — and erasing people’s freedoms in ways that are horrible and wrong, and not why people came to America or built this country … What the fuck?” (“Excuse me,” he added, as an aside.) “It will cause great harm, not just to Tesla but to many companies. And while Tesla will weather the storm, there are many small companies (that) will not. And all of peoples’ … everything people have worked for their whole life is being destroyed in real-time.”

However, Musk has also openly broken with the president on a variety of issues, such as Trump’s controversial move to withdraw from the Paris climate agreement in 2017 (something that Musk believed in strongly enough that Trump’s Paris climate accord decision caused him to leave a presidential advisory council).

Musk voting for Trump this time around would be particularly interesting because it doesn’t actually sound like he supported Trump the first time. When he was asked prior to the 2016 election, Musk acknowledged that Trump was “probably not the right guy” and “doesn’t seem to have the sort of character that reflects well on the United States.”