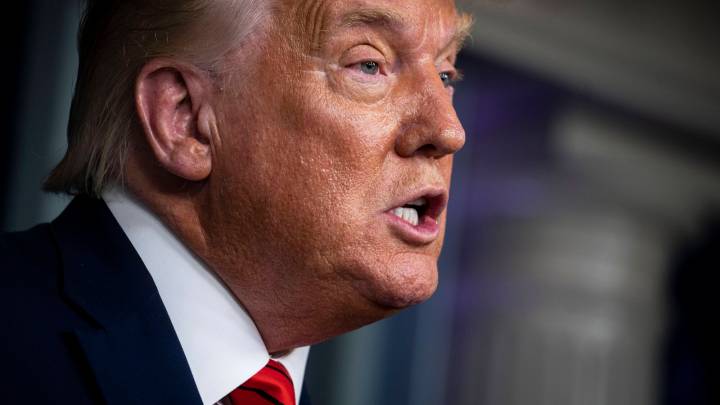 After tolerating pretty much open warfare between his administration and the man who’s arguably become its most high-profile public health spokesman, Dr. Anthony Fauci, President Trump is now going to yet another extreme in his pushback against Dr. Fauci’s negative coronavirus updates. Specifically, the president is now dropping hints about firing Dr. Fauci once the election is over.

That’s according to comments from Trump himself during a late-night rally on Sunday and into the early morning hours of Monday in Miami, where Trump’s crowd at one point broke into a chant of “Fire Fauci!” Watch Trump’s response to their chant in the video below.

The “Fire Fauci!” chant starts at around the 12-second mark in this clip from CBS News:

The president stops speaking and appears to be surveying the crowd, just taking it in, and listening to the chant for several seconds. After remaining silent for a beat, with one hand on the podium, he abruptly issues his response to the chant: “Don’t tell anybody, but let me wait until a little bit after the election.” At which point, the crowd roars in approval.

Trump then picks up with his litany of now oft-repeated criticisms of Dr. Fauci, a White House health advisor who’s also been the director of the National Institute of Allergy and Infectious Diseases since 1984. “He’s a nice man, though he’s been wrong on a lot,” Trump told the crowd at the Miami-area Opa-Locka airport about Fauci.

Fauci, for his part, has in recent days spoken up more against erroneous statements from Trump, with one example being the assertion Trump has repeated on the campaign trail about the US “rounding the turn” against the pandemic, and that we’re in the final stages of bringing the coronavirus crisis under control.

That’s wrong, Fauci told The Washington Post on Friday. “We’re in for a whole lot of hurt,” he said. “It’s not a good situation. All the stars are aligned in the wrong place as you go into the fall and winter season, with people congregating at home, indoors. You could not possibly be positioned more poorly.”

As we noted here, Dr. Fauci is certainly aware that President Trump is not exactly his biggest fan. During an online event hosted by Chicago Ideas, here’s how Dr. Fauci responded when asked what he thinks about Trump calling Fauci a “disaster” and Trump’s claim that there’s too much attention being given to the pandemic:

“I have now, for the last 36 years, been the director of this institute and have dealt very closely with six separate presidents. And when I get involved as I do frequently in the country’s response to emerging infections, I focus like a laser beam on what I have to do, what my responsibility is … to safeguard the health, the safety and the welfare of the American public, and indirectly for the world because we are a leader in global health. So those other things that you mentioned, the name-calling and that, to me that’s just noise. It really is. I don’t bother with that. It doesn’t bother me. It doesn’t influence me.”