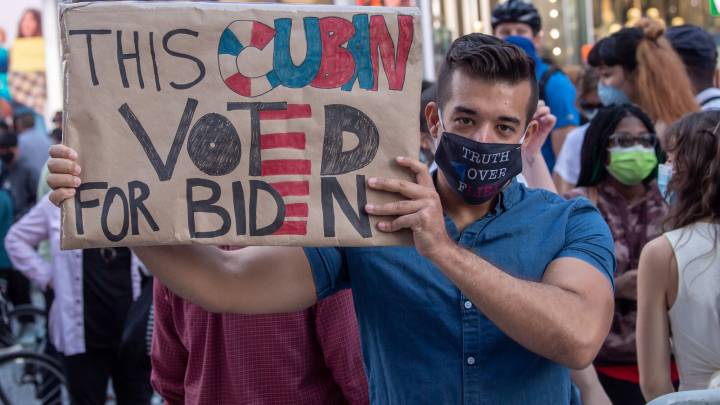 Supporters of President-elect Joe Biden, activists across the progressive spectrum and Democrats of all stripes took swipes on social media at President Trump in the aftermath of Election Day over his obviously doomed-to-fail quest to invalidate Biden’s clear electoral victory. The activists included people like actress Alyssa Milano, who sent the following public tweet to the president about the 2020 election results: “Hey, @realDonaldTrump! Question for you — if the Democrats fixed the election why didn’t they win the Senate and keep the seats (in) the house that they lost?”

It’s a query that you could actually argue isn’t being pondered as enough as it should be, given the preponderance of media attention focused on Biden’s transition in advance of his taking office come January 20 — and President Trump’s continued refusal to concede the race and let the wheels of the transition process start turning. Along those lines, Trump has filed impossible-to-win lawsuits in several states challenging the outcome of the election, has refused to allow the Biden team access to necessary transition-related resources, and the whole thing has gotten embarrassing enough that even staunch Trump backers like South Carolina Senator Lindsey Graham support letting Biden receive a presidential-level intelligence briefing now. Indeed, Biden’s win represented a major upset of the sort not seen often in presidential politics — the toppling of an incumbent. But Milano’s tweet also contains within it a darker truth that, in spite of the White House win, actually portends a somewhat ominous horizon for Democrats if they rush forward headlong into whatever 2021 entails.

Yes, Democrats won the White House. But as of the time of this writing, the Democratic lead in the House has actually shrunk, with the party having lost several seats — something that wasn’t supposed to happen, given how vociferously the media hinted that the electorate was turning against President Trump and Republicans at large ahead of Election Day because of factors like the coronavirus pandemic.

Along the same lines, also as of the time of this writing, Republicans still control the Senate, though Democrats are gambling that they can pick up the seats they need in Georgia to wrest away control (albeit very narrowly, including Vice President Kamala Harris’ tie-breaking vote).

Depending on which half of the glass you tend to see, empty or full, a cynical person might see in the November 3 results the seeds of a failure that could end up haunting Democrats for years. Especially the farther down the ballot you go.

.@WhipClyburn to @alexi on why Democrats lost seats in the House in the election:

Having @SpeakerPelosi go unchallenged when Democrats lost seats in the House in election where they should have had many pickups is unacceptable. Only right-wing challenges to her are unacceptable. So I nominate @RashidaTlaib for Speaker! We need a STRONG leader. #RunRashidaRun

The finger-pointing has already started. Some corners of the party have laid the blame for the under-performance on Election Day 2020 at the feet of the progressive elements of the party, like New York congresswoman Alexandria Ocasio-Cortez. She, in turn, has fired back that she deserves none of the blame — that, instead, poorly run campaigns do.

Not only will House Speaker Nancy Pelosi’s job now be a little more high-stakes, since she can afford fewer defections in the lower chamber of Congress. But a GOP-led Senate can also frustrate plenty of the Biden agenda, starting right off the bat with any Biden cabinet appointees the Senate might want to block.

Democrats are also doing a bit of soul-searching over the Latino vote, which the party assumed it had a lock on thanks to Trump’s talk over four-plus years of anti-immigration rhetoric and The Wall. To cite just a couple of examples of how things ended up with this particular demographic bloc, Trump scored more than 40% of the Hispanic vote in several border countries in the Rio Grande Valley — which is Democratic territory. Likewise, Trump came away with 45% of the Latino vote in Florida, which represented an 11-point gain over his performance there in 2016.

Yes, Biden won the race for the White House. He won it convincingly, and the country will be better off once President Trump acknowledges that fact. However, it’s also easy to forget that on November 3, President Trump actually won more popular votes than President Obama did in 2008. In fact, Trump last week got more votes than any other candidate in history — except one. The one who will take office in January of 2021.