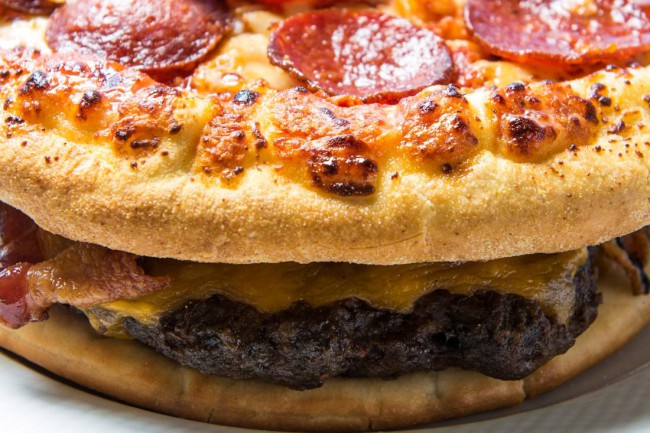 Remember the good old days when going to the ballpark meant buying a hot dog, crackerjacks and a Coke? Like most good things in our depraved modern age, these simple pleasures had to be “fixed” even though they were never broken in the slightest. That’s why we’re now seeing two new ballpark treats that honestly could kill by the time of the 7th-inning stretch: The Burgerizza and the Cracker Jack and Mac Dog.

MORE FAST FOOD: This is what an $80 Burger King Whopper looks like

The Burgerizza, which was flagged recently by Time, is being served in the Atlanta Braves’ stadium and it is exactly what it sounds like: A 20-ounce cheeseburger that replaces the traditional buns with two eight-inch pepperoni pizzas. It looks like this:

The Time article doesn’t mention a calorie count for this monster but I’m going to guess it would require advanced trigonometry to fully calculate.

The Cracker Jack and Mac Dog, meanwhile is being sold at the Pittsburgh Pirates PNC Park. Flagged by Fox Sports, this new twist on the classic hot dog is topped by cracker jacks, macaroni, caramel sauce and jalapeno peppers.

Wait, what? Yes, really. Check it out:

While I’m impressed at the ingenuity it took to come up with something like this, I have to say that I think we’re reaching the limits of what a sane human being would actually eat. Maybe next year Pizza Hut and Panda express can team up to offer a ballpark pizza with crust that’s stuffed with General Tso’s Chicken. Until that happens, though, I can’t imagine a more awkward flavor and texture combo than the Cracker Jack and Mac Dog.