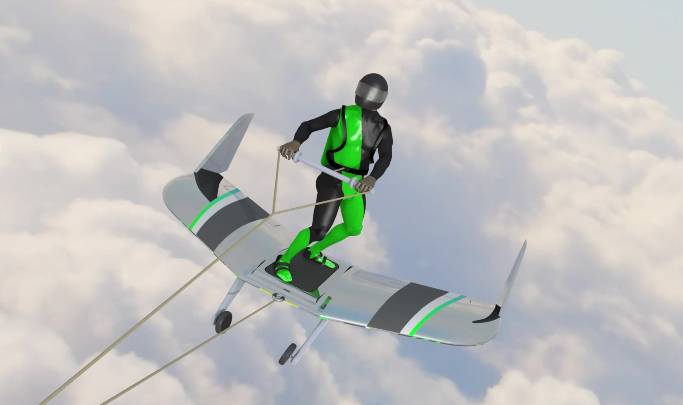 Extreme thrill seekers will surely jump at the chance of trying WingBoards as soon as they become commercially available, as this particular type of recreational device will let humans fly up in the sky longer than anything else. WingBoarding is similar to wakeboarding, skateboarding, surfing or snowboarding… it just happens way up in the sky.

“The WingBoard is like a wakeboard, but instead of slicing through waves behind a boat, you’re being towed by a plane, carving through clouds,” Wyp Aviation co-founder and lead engineer Aaron Wypyszynski explains in the CNN video below.

The product is not quite ready for commercial sales, as Wypyszynski and his team are testing larger and larger scales of the product to determine whether it would actually be safe for consumers.

WingBoarding requires the user to be attached to a wing that he or she would balance in the air while being towed by an airplane. The WingBoarder would fly at speeds of around 70mph, performing various tricks while up in the air. That means the human body must be able to deal with the different forces that are involved in such maneuvers. After all, we’re not actually made to fly without a cockpit around us.

The following videos are certainly worth watching even if WingBoarding sounds too frightening for you, as they perfectly explain what’s behind this extreme sports concept.