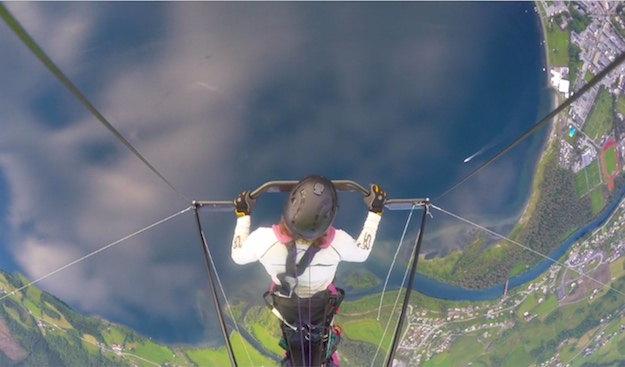 As far as heart-pounding and harrowing video is concerned, the footage below of a hang gliding mishap at an extreme sports event in Norway may take the cake.

In late June, world championship hang glider Jon Gjerde was performing a few tricks for a crowd of on-lookers when his hang glider spontaneously broke mid-air. Amidst a number of “ohhhs” from the crowd, Gjerde — still attached to the hang glider — began to violently twist and turn as he steadily began falling back down to land.

Thankfully, Gjerde managed to deploy his parachute before crashing back down to earth. The video below, which captured the entire incident, is truly jaw-dropping.

In the wake of the incident, Gjerde took to Facebook where he added some insight into what went wrong.

My Hanggliding accident last tuesday on Video. I am OK but still suffer from sore eyes and head-ache after serious negative G-force. after glider collaps, my harness was somewhat broken and I was sentrifuged head out. My vision failed and I struggled hard against g-force to get my rescue out.

On the GoPro it is possible to see details.

I have lots of speed and get an abrupt pullout by accident. The reason for this is to high speed, and bent elbows on the bottom of the dive.

I flew a Moyes Litespeed rx4 with racing wires. With standard (thicker) wires the glider may have stayed together (although not built for 160+ km/h…and G-force probably above 7?)

The following GoPro footage of the mishap offers an equally terrifying perspective on what went down.