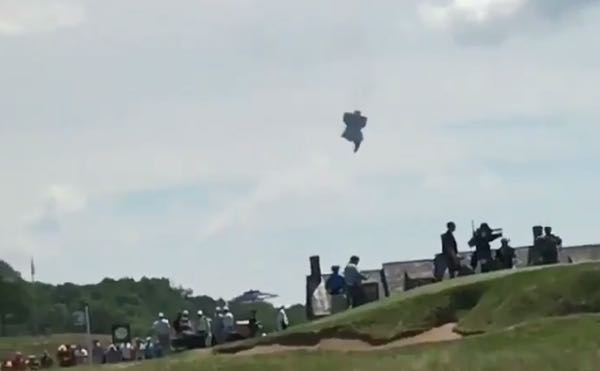 The PenFed Credit Union blimp flying over the US Open has caught fire and crashed, numerous videos on social media show. It appears that at least one person managed to bail out and deploy a parachute, but no news of injuries or further details are out yet.

Video from several angles has been shared by users on Twitter, which all show the same thing: a blimp clearly partly on fire, falling to earth in the woods next to the event. Just towards the end of the videos, you can see at least one person jump out and deploy a parachute.

Update: The tournament organizers have confirmed that a blimp did indeed crash, and that the pilot is injured but alive. First responders are on the scene.

Our thoughts and prayers are with those who were injured.

@usopengolf #USOpengolf #blimp just crashed at the US Open. Pilot looked like he bailed out pic.twitter.com/X6MqxB6yWz

A photo posted to Twitter earlier today shows what the blimp originally looked like. You can see the small crew cabin below the main blimp, and it looks like it only has space for one or two individuals inside.

If you are lucky enough to be at the US Open today share your blimp sighting pics! @penfed #PenFedBlimp #USOpen #USOpen2017 #ErinHills #Golf pic.twitter.com/trFyddODWD

TMZ has obtained footage that shows the aftermath of the crash. The main body of the blimp is badly burned, but you can still make out the pilot’s enclosure in the wreckage.

The 2017 US Open is being played in Erin Hills, Wisconsin, from today until the weekend.