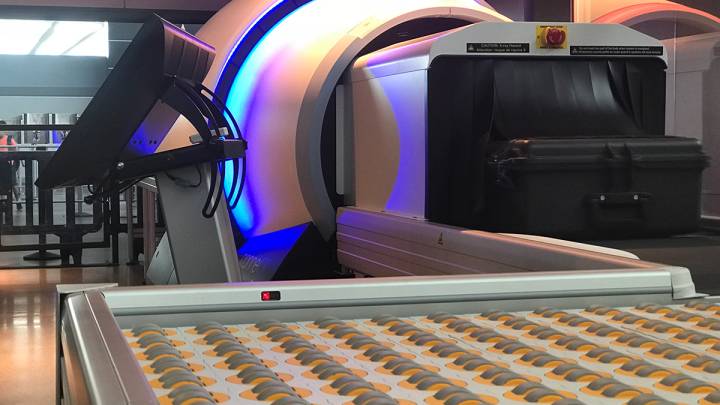 Travelling through airport security these days is a fun game where you check that all of your personal possessions meet a set of arbitrary rules, partially disrobe, get scanned by machines that can see through your remaining clothes, and then have your entire bag disassembled because the X-ray machine can’t tell the difference between a bottle of water and a camera lens.

There are undoubtedly ways of improving the process, but rather than examining how other countries handle the security threat and learning their hard-won lessons, the TSA’s solution is to throw more money at things. In this instance, the TSA teamed up with American Airlines to test a new three-dimensional bag scanner, which will give baggage inspectors a better view of what’s inside your bag, and more importantly let you leave your laptop and liquids inside your bag.

The scanner uses the same computed tomography (CT) technology that’s been commonplace in hospital scanners for decades. The scanner is built by Analogic, and includes neat software tools for agents to visually explode and rotate the scan in 360 degrees. Having recently missed a flight because two TSA agents couldn’t find a single (and legal!) hex key in my carry-on, anything that helps TSA examine baggage faster and with less unpacking of my bags is welcome.

The new scanner will be in operation at New York’s JFK airport starting in late July, and the TSA is also testing the technology at security checkpoints in Phoenix and Boston. There’s no data on how much the scanners cost compared to normal X-ray machines, but given the speed at which airports transitioned from metal detectors to the (much more expensive) full-body scanners a few years ago, I wouldn’t be surprised to see the new machines roll out at speed.