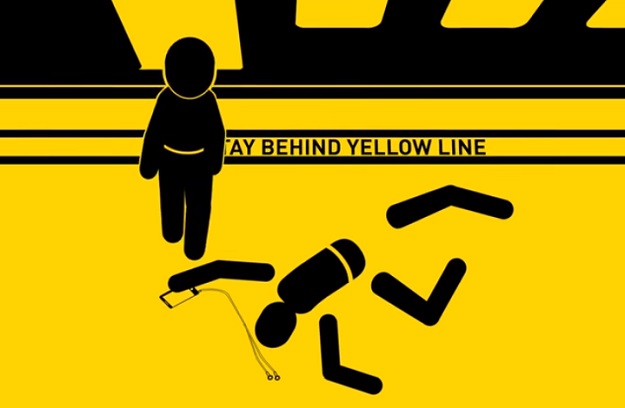 When I took Drivers Ed way back when, I remember being shown unusually graphic videos from the 1960s which depicted horrific scenes recorded in the aftermath of particularly gruesome accidents. The message was clear, if not a bit overdone: driving can be exceedingly dangerous and you better obey the rules of the road lest you wind up in a video like this.

Perhaps looking to these videos for inspiration, Metro Los Angeles this week released five animated videos that illustrate all of the horrific things that can happen if you don’t respect the safety guidelines that govern train transit.

DON’T MISS: iPhone 7 will be Apple’s riskiest iPhone release yet

The videos, while being nothing more than black and yellow animations featuring stick figures, are surprisingly violent and graphic. Even the video titles themselves don’t leave much to the imagination, with “Dismount or dismembered?” being one such example. Since their release this week, the videos have gone somewhat viral, if only because it’s not too often that we see a public transit outfit release something that was seemingly lifted from an entirely different generation. And naturally, some can’t help but view these safety videos as nothing more than comical.

So without further ado, here’s what Metro Los Angeles decided to unleash upon the public earlier this week.

First up, we have “Present or pulverized?” which highlights the danger of being locked into your phone, oblivious to the environment around you.

Next up, we have “Careful or crushed?” which showcases what happens when you try and beat a train rolling down the track.

The rest of the collection of bizarre videos can be seen below.