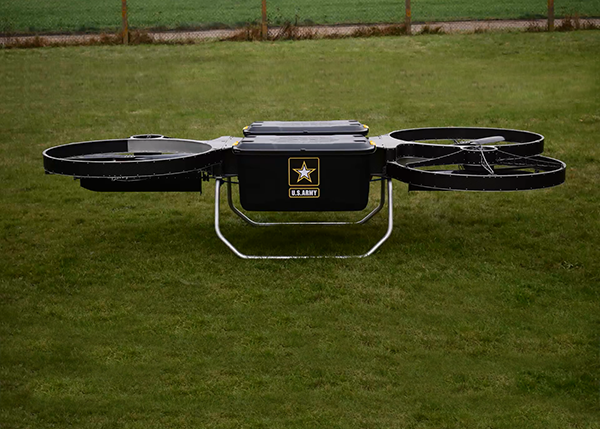 Remember those speeder bikes in Star Wars that raced through the air? Soldiers and Marines may get to zoom around the battlespace on a type of real-life version in the not-so-distant future.

Why the interest in a Hoverbike for American ground forces?

The U.S. military believes it could possibly carry teams rapidly and nimbly throughout the battlespace, and a robotic version could even be used to deliver supplies by itself.

This flying motorcycle could provide three options: it could be flown by a warfighter; it could fly itself around using advanced autonomy; or a mix could be employed where a warfighter flies it and lets the smart vehicle do some of its own flying as well.

The Hoverbike started in a garage in Sydney, Australia. New Zealander Chris Malloy began working on it as a hobby, but it rapidly gained traction commercially.

Most of the original Hoverbike frame was handcrafted from Kevlar, carbon fiber and aluminum with a foam core.

The design is similar to a quadcopter. It has four standard helicopter-style shrouded rotors and they overlap with each other and help provide stability.

The full sized Hoverbike will harness a motorcycle engine and controls. It could ultimately be as large as a small car. The current mini-prototype is operated in a way that’s similar to a hobbyist quadcopter. The smaller version uses electric motors and a standard RC helicopter controller can be used to direct it.

The Hoverbike has entered its third generation of development. For enhanced reliability and survivability, this generation has multi-engine redundancy and special yaw control, in addition to other advances.

The chassis is adaptable so it can be quickly reconfigured for specific missions.

There is a fully autonomous option – so this is a speeder bike that can fly itself. The high level of autonomy also means that learning to ride it should be relatively easy. It can be adjusted to vary how much input the pilot would like to give; it calibrates to how much autopilot a warfighter wants.

US military Hoverbikes could be programmed with easy waypoint-to-waypoint navigation and fly itself between points and could even eventually avoid obstacles on its own.

Picture Luke Skywalker and Princess Leia battling it out with enemy soldiers in that iconic chase scene in “Return of the Jedi” while on speeder bikes. Luke and Leia had to fly their speeder bikes and navigate throughout a forest while returning fire. But American warfighters could let the Hoverbike do the work for them and instead focus on returning fire.

It has also been designed to be stealthy in a number of ways.

Since it flies through the air, rather than drives on the ground, it has a very small physical footprint. The operating envelope is below the radar. For a reduced acoustic signature, it’s been designed to minimize propeller tip noise from the shrouded fans.

The full-sized prototype could potentially travel at speeds of approximately 100 mph. One tank of gas could yield about 45 minutes of transport.

Rectangular-shaped, the prototype is expected to be large enough to carry up to 300 pounds of supplies, or a warfighter with body armor and equipment. With that weight, it can currently travel about 10 miles before refueling.

In firefights, ammunition can run low quickly and resupply is important and time-sensitive. Currently, helicopters can be used to drop off these urgent supplies, but in the future a JTARV could zoom out instead.

Ultimately, there are hopes that it could reach and resupply anywhere in the battlespace within 30 minutes.

Cattle, commuter traffic and beyond

How could the Hoverbike be used in the civilian world?

In addition to fun, it could be used for farming or managing cattle, as just two commercial applications. It could even become a vehicle of choice to get to work and avoid that commuter traffic. Once testing is completed, the company plans to submit the prototype for certification with aviation authorities for use in civilian airspace.

The latest full-sized prototype is completing construction and will begin flight tests in a few months.

Allison Barrie consults at the highest levels of defense, has travelled to more than 70 countries, is a lawyer with four postgraduate degrees and now the author of the new book “Future Weapons: Access Granted”  covering invisible tanks through to thought-controlled fighter jets. You can click here for more information on FOX Firepower columnist and host Allison Barrie and you can follow her on Twitter@allison_barrie.