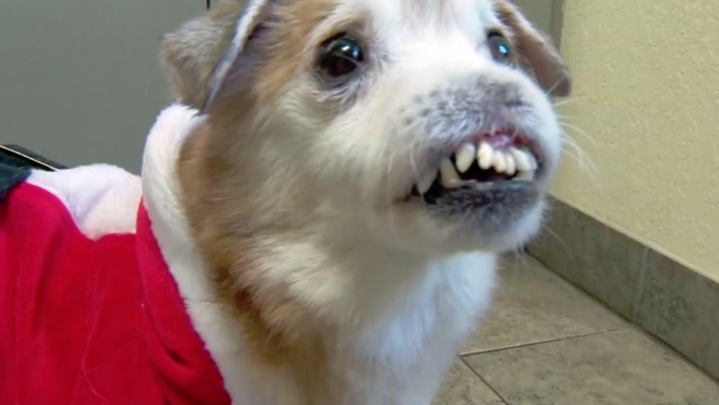 The holidays are a time of giving, and if you’re looking to give a homeless pet a new life, you probably won’t do much better than Sniffles. Found by Orange County Animal Services, Sniffles is a stray with a rather unique condition: he was born without a nose.

The pup gets along just fine without a sniffer and, while he does have a habit of snorting, it hasn’t affected his pleasant disposition. After going through an exam at a local vet in Florida, Sniffles was given a clean bill of health. Now, he needs a forever home, and the internet is falling all over itself to find him one.

“He’s just a precious old man. Everyone at the vet’s office has fallen in love with him,” Michelle Wacker of the Poodle and Pooch Rescue told WESH. “He’s a healthy dog. He just looks a little funny.”

Sniffle is thought to be around 12 years old, so he’s not quite a spry as he used to be, but his days of roaming the streets appear to be at an end. The pooch is now being fostered, but will need a new, more permanent home soon.

Along with his missing nose, Sniffles also has some seriously crooked teeth that give him a peculiar look. His chompers won’t look that way for long, however, as the pup is scheduled for some dental work that will straighten out his bite. After that, he’ll be ready for adoption, and given his newfound celebrity status it likely won’t be long before he lands in a loving home.

If you’re interested in adopting Sniffles you are asked to contact the Poodle and Pooch Rescue. You can also apply to adopt a pet via their website.