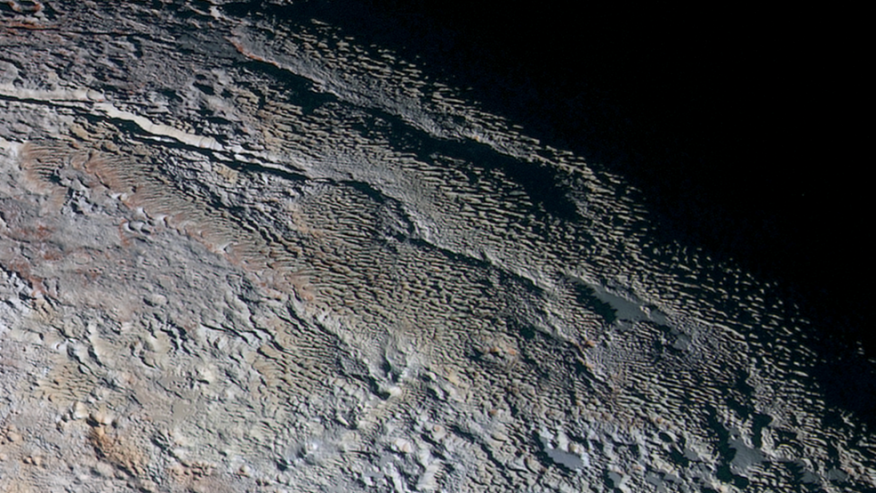 Cold, dark, distant Pluto is home to giant ice ridges, and now scientists are closer to understanding how they formed— and they think it was through a process that creates similar, smaller formations on Earth.

The erosion-formed features on Pluto are called penitentes, and rise over 1,600 feet tall– that’s higher than the Empire State Building– and stand about two to three miles apart. The professor behind the study used a computer model to predict how these dramatic features form.

“This gargantuan size is predicted by the same theory that explains the formation of these features on Earth,” John Moores, an assistant professor of space engineering at York University in Toronto, said in a statement. “In fact, we were able to match the size and separation, the direction of the ridges, as well as their age: three pieces of evidence that support our identification of these ridges as penitentes.”

HUGE BLACK HOLE MAY HAVE TURNED STAR INTO ‘SPAGHETTI’

The researchers think that having an atmosphere is a key part of the formation of these features (seen in a region of Pluto called Tartarus Dorsa), as is a process called sublimation, in which a solid— like methane ice— becomes a gas, skipping the liquid phase.

“The identification of the ridges of Tartarus Dorsa as Penitentes suggests that the presence of an atmosphere is necessary for the formation of penitentes, which would explain why they have not previously been seen on other airless icy satellites or dwarf planets,” Moores said in the statement. “But exotic differences in the environment give rise to features with very different scales.” (Penitentes on Earth are much smaller.)

It may take tens of millions of years for these features to form on Pluto, the researchers think.

The research findings, done in collaboration with Johns Hopkins University and NASA, were published online Wednesday in the journal Nature.