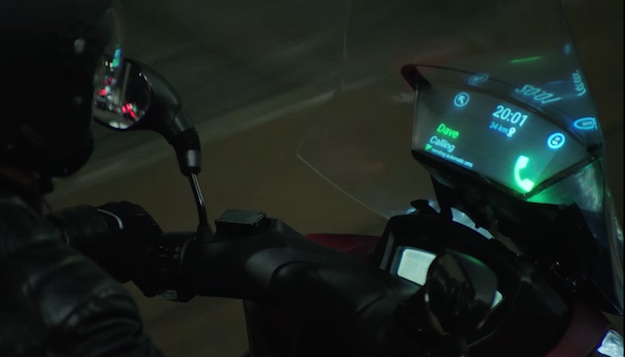 You might know Samsung as a company that releases advanced smartphones and pretty snazzy HDTVs, but the Korean-based tech conglomerate has its hand in a bit of everything. From security cameras and lightbulbs to dishwashers and touchscreen refrigerators, Samsung has an incredibly extensive, varied and impressive product line.

That said, it shouldn’t come as much of a surprise that Samsung has an absolutely astronomical R&D budget. In 2014, for instance, the company spent $13.8 billion on R&D, a figure that far eclipsed every other company on the planet, save for Volkswagen.

With the company investing billions on new products and technologies, Samsung every once in a while will showcase some of the cool things they’ve been working on. Most recently, the company showed off a concept product it calls the Samsung Smart Windshield.

Developed in conjunction with Yamaha, the motivation behind the Smart Windshield is clear: ensure that motorcycle riders keep their eyes on the road. As we detailed just yesterday, taking one’s eyes off the road just for a quick second to attend to a text can often have fatal consequences. And with motorcycles, the room for error is much smaller than it is in a car.

Samsung’s solution? A digital windshield that connects via Wi-Fi to a user’s smartphone and displays pertinent information about incoming calls and texts, thus allowing riders to keep both hands on the handlebars and focused on the road.

“From now on, to check your smartphone while out riding, you only need to look ahead,” the promotional video boasts.

You can check out Samsung’s promotional video for its Smart Windshield below.

Of particular interest is that this isn’t the first time we’ve seen a Samsung effort designed to make road travel safer. A few months back, we highlighted a Samsung ‘see through truck’ that allows drivers behind large trucks to see what traffic in the oncoming lane is like in real-time.

You can check that concept out below.