A video that went viral on TikTok recently demonstrates a clever way to store leftover pizza in the fridge without having to find enough room for an entire box. This pizza box hack, of sorts, is especially useful in situations where your fridge has little room to spare and it makes no practical or logistical sense to keep one or two slices inside of a large or even extra-large pizza box.

As it turns out, every pizza box is constructed in such a way that you can quickly and easily turn a regular-sized box into a much more svelte package. The TikTok video showcasing this life hack was first published in late 2019 but started making the rounds again not too long ago. Suffice it to say, people who have been dealing with oversized pizza boxes for years were simply blown away by this clever little pizza hack.

The gist of the video is simple: by simply tearing off parts of the original pizza box, you can transform it into a smaller container. The first step is to tear rip the top of the pizza box off. Next, you’ll want to remove some of the excess packaging on the sides. And for the final step, you can essentially fold the bottom portion of the pizza box into itself and, in turn, create a new and much more space-efficient creation.

The video demonstrating this hack can be seen below:

I actually tried doing this over the weekend and it actually worked like a charm. Given the avalanche of life hacks and “pro tips” one seems to come across on social media these days, it’s not uncommon to stumble across “how-to” videos that appear to be game-changers on the surface but are actually misleading. Suffice it to say, I was pleasantly surprised that the pizza box I ordered over the weekend could be folded in the same manner as the video above.

Now does this trick work with every single pizza box as the video claims? Truthfully, I’m not familiar with the intricacies of pizza box design and have no idea if every pizza box is constructed in the exact same manner. Still, you’ll want to keep this trick in mind the next time you have some leftover pizza and are looking to save some storage space in your refrigerator.

Incidentally, the trick does work with Dominos pizza boxes. In fact, the image below made the rounds about six years ago on Reddit, which is something of a lifetime in internet years. 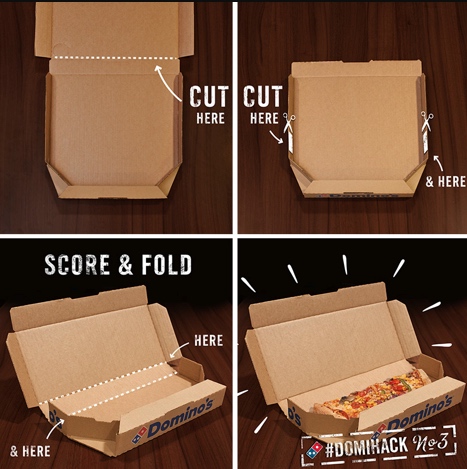 On a somewhat related note, there’s an online theory I stumbled across a few years back which suggests that leftover pizza actually tastes better than fresh pizza. And not surprisingly, a chemist more than 21 years ago, during an interview with the BBC, explained exactly why leftover pizza can often taste so incredible.