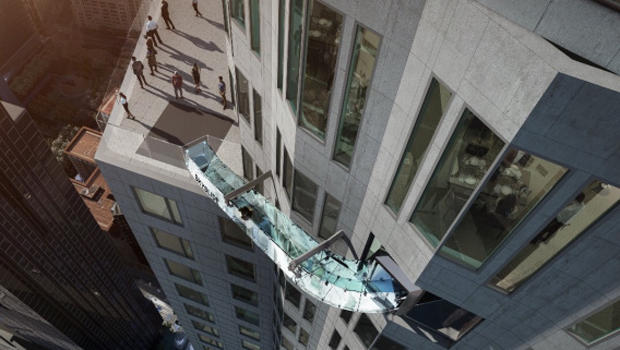 How would you like to go down a transparent slide that’s mounted over 1,000 feet in the air? If that sounds like your thing, then you’ll definitely want to check out the new Skyslide that’s being built on the side of the U.S. Bank Tower in Los Angeles. Per The Los Angeles Times, the slide will begin on the building’s 70th floor and will take riders down to its 69th floor. While this doesn’t seem like much of a drop, the slide itself is about 45 feet in length and will give you a bird’s eye view of the entire city on your way down.

As The Los Angeles Times notes, this slide is part of a gigantic $50 million renovation of the U.S. Bank Tower, which happens to be the tallest skyscraper on the West Coast. Riding on it will not be free, however: You’ll have to pay $8 to take a trip on the Skyslide, and that’s after you’ve already paid $25 for access to the new Skyspace complex where it will be located.

Even so, riding on the Skyslide looks like a lot of fun. Gizmodo has a terrific video that will give you an idea of just how far off the ground you’ll be if you ever decide to give it a shot.