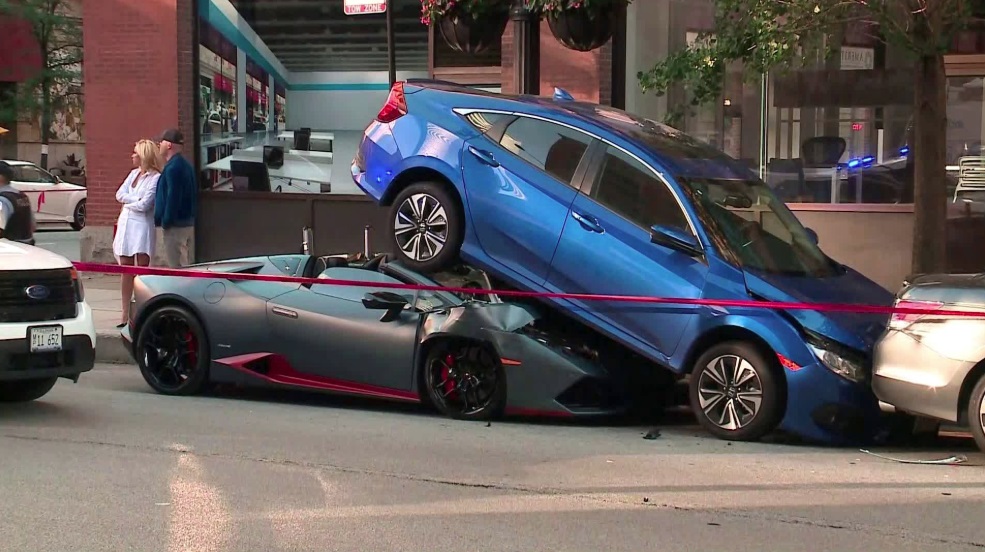 A bizarre accident over the weekend saw a pricey Lamborghini Huracan get wedged underneath a Honda Civic. While the trusty and reliable Honda Civic appeared to emerge unscathed, the same can’t be said for the Lambo which likely costs somewhere in the $200,000 to $250,000 range.

The incident in question went down in Chicago this past Friday, according to a report from CBS Chicago. As the driver of the Lambo explains it, he was driving around the city when he was suddenly hit by another car from the back. Looking to hit the brakes in a panic, the driver accidentally hit the gas pedal instead, a move which sent the speedy Lambo hurling right into the back of a parked and completely innocent Honda Civic. And given the low sloping front-end design of the Huracan, the sports car managed to lift the Civic up off the ground and wedge itself underneath it.

Predictably, it didn’t take long for photos of the peculiar crash to start making the rounds on social media. Pictured below is a side shot of the aftermath.

The Lambo certainly has some significant damage but it appears to have held up reasonably well considering the circumstances. The upside, though, is that if you can afford to purchase a Lamborghini Huracan, there’s a good chance that getting it fixed won’t be much of an issue for you. That said, auto repairs aren’t for everyone, which is to say that the couple involved in the crash told CBS News that they plan to go shopping for a new car later today.