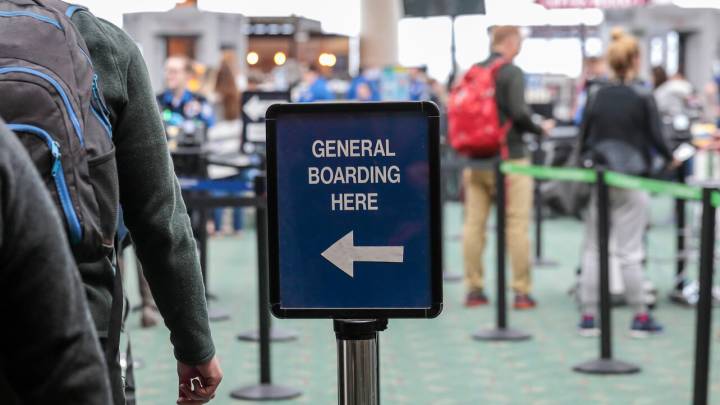 Airline flights are increasingly becoming the next battleground in the standoff between Trump supporters and members of the public as well as authority figures.

Over the weekend, a video went viral and so far has racked up more than 18 million views for depicting a crying man who’d been kicked off a flight. “This is what they do to us,” the man is shown lamenting in the video, which you can check out below. “They kicked me off a flight, they call me a (expletive) terrorist and they want to rule my life.” Originally, the assumption that been that this man might have been connected to the DC riots, but New York magazine and Huffington Post writer Yashar Ali said via Twitter that the man was instead booted from a plane for not wearing a face mask.

The caption of the original video, which was shared on TikTok, reads as follows: “Homeboy had a full toddler level meltdown bc he was told to wear a mask 🥱#fyp.”

Just like the other TikTok I just quote tweeted, this has nothing to do with the US Capitol Building or no-fly lists as it relates to domestic terrorism.

This man, according to the woman who filmed it, was kicked off the flight for not wearing a mask. https://t.co/dBoz18uXUd

Even though this issue seems to have stemmed from airlines’ very appropriate rigidity around the requirement that everyone on board must wear a coronavirus face mask, Trump supporters are also increasingly being put on notice that loud, disruptive episodes will be dealt with swiftly. And if you noticed that there is a Venn Diagram intersect that encompasses both of these groups of people, you get an extra bonus point.

As we’ve previously noted, there has already been a call from congressmen to put Trump supporters who attended the DC riots last week on a no-fly list. If that sounds extreme, it’s simply an effort to keep the situation inside the plane cabin from turning into something like this:

Last week, passengers on another flight started chanting and making enough of a disruption as they left the Capitol Hill riot to return to Phoenix that their American Airlines pilot reportedly threatened to “dump people off.” Said the pilot, according to Newsweek: “This is going to be a four-and-a-half hour flight out to Phoenix. We’ll put this plane down in the middle of Kansas and dump people off. I don’t care. We will do that, if that’s what it takes, so behave, please.”

Meanwhile, the airlines themselves maintain their own individual no-fly lists, warning passengers that refusing to wear face masks will earn them a spot on that list. To cite one example, Delta Airlines through the end of 2020 had already put almost 700 people on its own no-fly list for this reason.